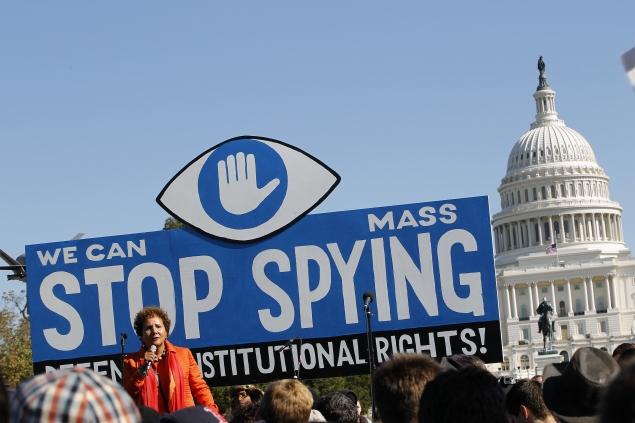 Major mobile phone providers in Ukraine deny that they’re working with the nation’s government to spy on protesters, who’ve brought a fresh and intense round of pro-democracy rallies to the capital city of Kiev during recent days.

While the government of Ukrainian President Viktor Yanukovych drew international scrutiny for its harsh crackdown of similar demonstrations last month, new shock waves are now surging through the nation amid reports of intimidating cell phone texts being sent to demonstrators.

Headlines in the English-language media on Tuesday suggest the Yanukovych government may be tracking protesters through their cell phones.

The Kyiv Post reported that the nation’s three-largest mobile phone operators have denied sending text messages to subscribers that stated they were being registered “as participant in a mass disturbance.”

The messages were received by mobile phone users shortly before and after midnight on Jan. 21-22 on a street in the city “where anti-government protesters and police have been in a three-day standoff,” The Kyiv Post said.

The text message contained the language about public demonstrations that was used recently in a new law passed by the Yanukovych government — carrying a 15-year prison sentence for anyone found to be participating in a rally deemed violent by the government.

A report Tuesday by The New York Times said the new law and a package of other legislation passed by pro-government political parties in Ukraine’s parliament “appeared modeled on rules in neighboring Russia, which has pioneered the coordination of legislation tightening rules on free speech and public assembly with technological capabilities.”

When protests broke out in the Ukraine last month, some in Washington’s foreign policy community argued the developments could be tied to Russian desires to extend new influence over the former Soviet Republic, whose economy has struggled badly during recent years.

Some analysts have argued Moscow’s influence manifested itself in s successful drive to pressure the Yanukovych government into dropping what had been a Ukrainian plan to sign a major trade and political agreement with the European Union.

The agreement may have clinched a tumultuous shift by the strategic former Soviet republic in the past decade toward embracing Western economic and political values. Mr. Yanukovych’s sudden decision to turn his back on the deal in late-November infuriated the nation’s opposition parties and sent millions of pro-Western, pro-democracy demonstrators into the streets of Kiev.

But Mr. Yanukovych did not yield to the protesters. To the contrary, in the wake of the demonstrations, he accepted a $15-billion loan from Moscow.

With the public unrest now raging again in Kiev, speculation has swirled over the lengths to which the Yanukovych government may be willing to go clear the streets of demonstrators.

The Kyiv Post on Tuesday said the rattling text messages were sent to phone users with accounts held by MTS Ukraine, Kyivstar and Life mobile operators. The article said: “MTS Ukraine and Kyivstar are controlled by Russian companies, while Life is jointly owned by Ukraine’s richest billionaire, Rinat Akhmetov, and Turkey’s Turkcell.”

On its Facebook page, Kyivstar said it “categorically denies any involvement with these kinds of text messages,” the newspaper reported.

The statement continued: “In accordance with current legislation, Kyivstar is in strict compliance with the confidentiality of information about subscribers, their phone numbers and locations.”

It said it doesn’t have the technical capability to trace or stop the activities of so-called “pirate base stations” that could have been used to send the text messages.

The Kyiv Post reported that other companies, MTS and Life, had made similar statements of denial.