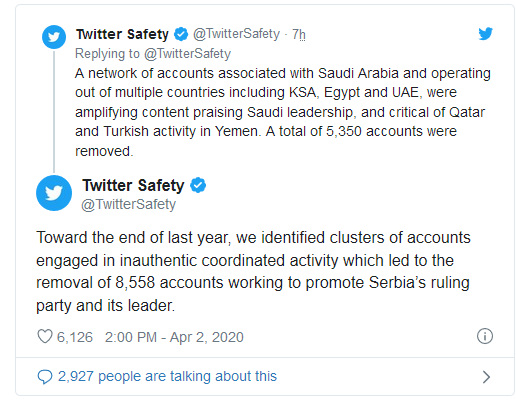 Twitter has deleted 20,000 fake accounts linked to the governments of Serbia, Saudi Arabia, Egypt, Honduras and Indonesia, saying they violated company policy and were a “targeted attempt to undermine the public conversation”.

Yoel Roth, the head of site integrity, said the removal of the accounts was part of the company’s ongoing “work to detect and investigate state-backed information operations”.

Of the accounts removed on Thursday, 8,558 were linked to the Serbian Progressive party (SNS) of Aleksandar Vučić, the president. The accounts had posted more than 43m tweets amplifying positive news coverage of Vučić’s government and attacking his political opponents.

Twitter also removed a network of 5,350 accounts linked to the Saudi monarchy operating out of Saudi Arabia, Egypt and the United Arab Emirates. Together they had tweeted 36.5m times praising the Saudi leadership or criticising Qatar and Turkish activity in Yemen.

The takedown of the accounts followed a tip from the Stanford Internet Observatory, which said that network had also generated tweets supportive of the Libyan warlord Khalifa Haftar.

A separate Egyptian network of 2,541 accounts linked to the pro-government El Fagr newspaper, was also removed. Twitter said that the fake accounts had been used to “amplify messaging critical of Iran, Qatar and Turkey”.

The social media company deleted more than 3,000 accounts which it said had been traced to a staffer working for the Honduran president, Juan Orlando Hernández.

“Much of the tweet behavior seems targeted at drowning out negative news about the Honduran president by promoting presidential initiatives and heavily retweeting the president and news outlets favorable to his administration,” the Stanford Internet Observatory said.

Following up reporting by investigative journalists at Bellingcat, the company said it had removed 795 fake accounts promoting the Indonesian government and targeting the West Papuan independence movement.

Twitter has purged networks of state-backed fake accounts since coming under criticism for being used as a vehicle for disinformation. Last month Twitter took joint action with Facebook and to disable a Moscow-linked operation aimed at inflaming racial tensions in the US, as the social media companies sought to respond to pressure to block attempted Russian interference in the 2020 presidential elections.

“Transparency is fundamental to the work we do at Twitter,” a company statement said. “These behaviors are in violation of our policies and are a targeted attempt to undermine the public conversation.”