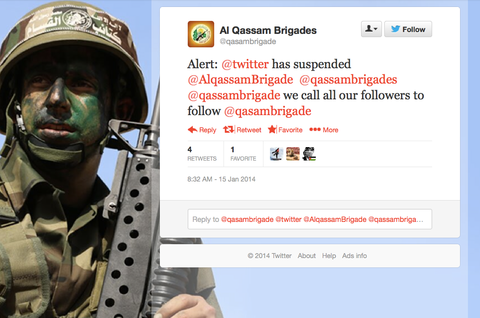 Last Updated, Sunday, Jan. 19 | Several Twitter accounts used by the military wing of Hamas have been suspended by the social network in recent days, angering the Islamist militants and delighting Israel’s military.

#Twitter has suspended the official account of #Hamas, a terrorist group that uses social media to threaten #Israel http://t.co/g1UxKc9fpf

As The Lede reported in late 2012 during Israel’s military offensive in Gaza, the blockaded Palestinian territory ruled by Hamas, the Islamist militants used their now-suspended @AlqassamBrigade Twitter account to reply directly to messages from @IDFSpokesperson, the official account of the Israel Defense Forces.

Although those exchanges of insults and threats have disappeared from the social network with the suspension of that account and at least two more used by the militants, the Israeli journalist Noam Sheizaf preserved a screenshot of one interaction that was posted on Twitter even as the two sides also traded rocket fire.

At the time, the online banter between the two enemies’ social-media teams led other Twitter users to suggest the warring parties might consider using the virtual space for peacebuilding.

@AlqassamBrigade @IDFSpokesperson you guys should just chat some more, post some pictures of cats at each other, maybe you’ll get along

The warring sides, however, clearly took the rhetorical exchange much more seriously, and the banter continued until recently, as a cached dialogue from October between the militants and Peter Lerner, a British-Israeli spokesman for the military, suggested.

A screenshot of a Twitter exchange between an Israeli military spokesman and the military wing of Hamas on October 22, 2013.

Twitter’s policy on abusive behavior states that “Users may not make direct, specific threats of violence against others.” A statement from the Israel Defense Forces noted that Twitter’s terms of service say that the platform is not open to “a person barred from receiving services under the laws of the United States or other applicable jurisdiction.” Hamas has been on the State Department’s list of foreign terrorist organizations since 1997.

A Twitter spokeswoman told The Lede in an email that the company does not comment on individual accounts “for security and privacy reasons,” but pointed to a page of Twitter Rules that “outline content boundaries on the platform.” Violations of those rules, the company explains, can lead to accounts being suspended or deleted.

While suspended accounts can be reactivated, deleted accounts are removed and the username becomes available to the public once again. The @AlqassamBrigade account has been suspended, not deleted, along with two new accounts with similar names that were apparently set up by the militants this week before quickly being shut down by the social network.

Using a fourth account, @qasambrigade, that was still operating when this post was originally published — but suspended later on Friday — the militants blamed Israel for the disappearance of their accounts and promised to continue using the platform to broadcast their message.

Israel’s military celebrated the effort to remove Hamas from the battlefield of Twitter the same week that virtual Mideast hostilities moved to a new frontier, when the acrimonious dispute over Ariel Sharon’s legacy raged on a section of the website Buzzfeed. A tribute to the late Israeli leader, written by a pro-Israel group, was posted on the site’s community platform on Tuesday under the headline, “9 Ways Ariel Sharon Earned The Nickname ‘Arik, King Of Israel.’” Although it was viewed only 1,600 times by the end of the week, critics of Mr. Sharon quickly attacked the effort to burnish his image in outraged comments.

The post celebrated Mr. Sharon’s career as a warrior in the site’s vernacular, with a list of achievements illustrated by clips from popular films and viral videos repurposed as animated GIFs. Among the items that left supporters of the Palestinian cause shaking their heads was the fifth entry, headlined “Sharon Was Directly Responsible for Creating the [sic] Israel’s First Dedicated Special Forces Unit.” That part of the post likened the work of Mr. Sharon’s Unit 101, held responsible for killing dozens of Palestinian civilians in the 1950s, to that of the Nazi hunters in Quentin Tarantino’s film fantasy “Inglorious Basterds.”

The GIF used to illustrate the section of the Buzzfeed post on Unit 101 was made from a scene in Mr. Tarantino’s movie in which the anti-Nazi unit’s commander, played by Brad Pitt, addresses a group of Jewish-American soldiers recruited to kill German officers.

According to the text posted on Buzzfeed by The Israel Project, an American advocacy organization run by a former Aipac spokesman, the story of Unit 101’s work was a simple one: “Tasked with curbing terrorist activities in the early 1950s, it was the only unit at the time to receive orders directly from the I.D.F. general staff. Needless to say, the unit was a success.”

An examination of the historical record, however, shows that the reputation of Mr. Sharon’s commandos, who carried out raids in retaliation for Palestinian attacks, was much more complex.

As Haaretz reported this week, Unit 101, established in 1953 under Mr. Sharon’s command, “engaged in several controversial actions such as the attack on the Jordanian village of Qibya, in which innocent people were killed and which drew worldwide condemnation.”

In October, 1953, Mr. Sharon’s unit launched a covert attack on the West Bank village of Qibya — then under Jordanian rule — in retaliation for a raid by Palestinian militants who came from a different area. An assessment by Jordanian forces concluded that the commandos had killed 69 Palestinians, including women and children sheltering in homes that were blown up as part of the mission.

When the killing of civilians on this scale led to harsh criticism of Israel, even by its allies, Israeli officials initially lied about the raid, denying that any military operation had taken place and blaming it on enraged Holocaust survivors, as the diaries of Moshe Sharett, Israel’s foreign minister at the time, later revealed.

In his own later account, Mr. Sharon insisted that the deaths had been accidental and his soldiers were unaware that anyone was left in the dozens of homes they blew up in Qibya. However, the Israeli historian Benny Morris later obtained and published the written orders to Mr. Sharon from his superiors in the I.D.F. command. Those orders clearly defined the aims of the mission as “maximal killing and property damage in order to chase inhabitants of the village from their houses.”