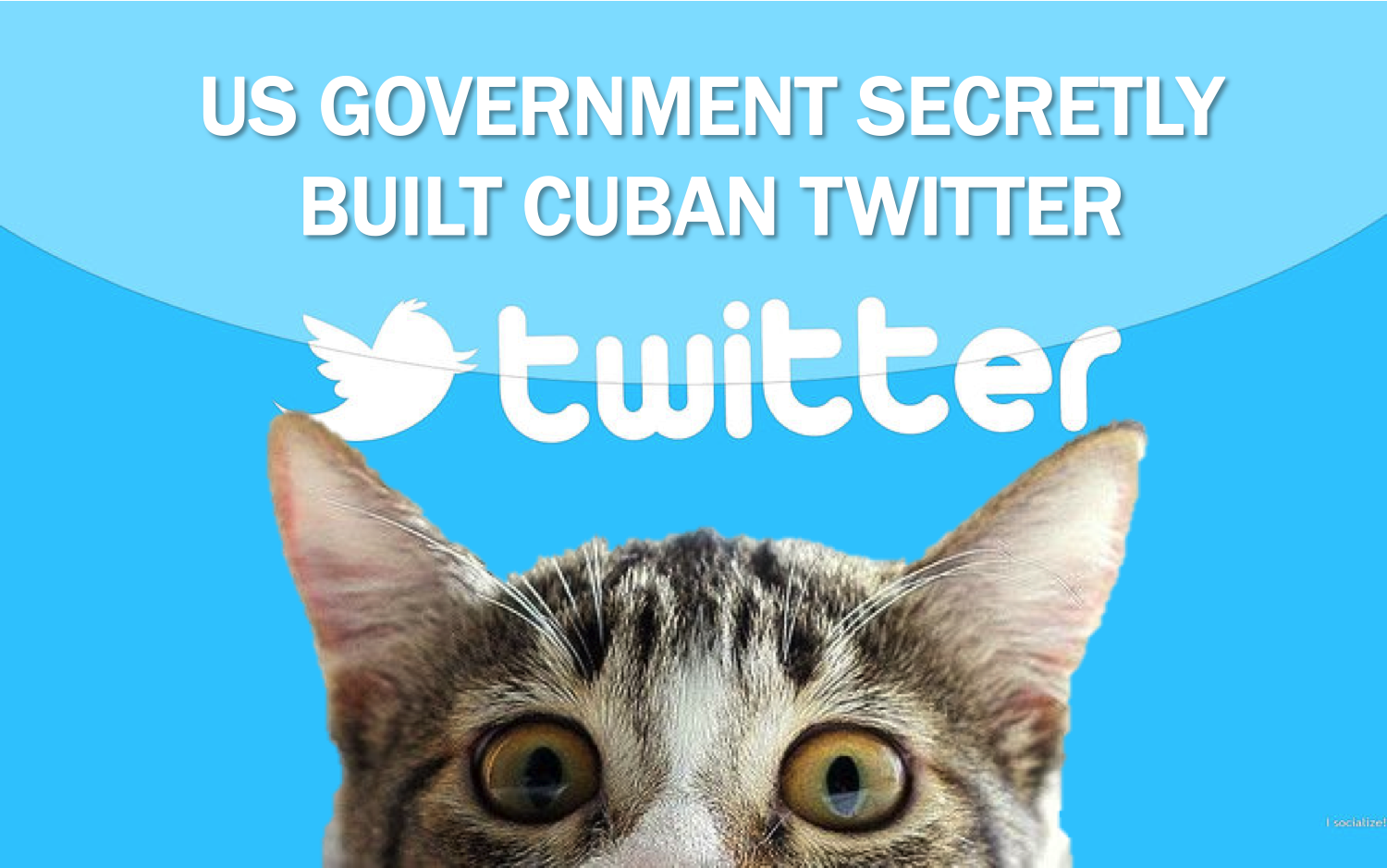 The U.S. government masterminded the creation of a Cuban “Twitter” — a communications network designed to undermine the communist government in Cuba — built with secret shell companies and financed through foreign banks, according to The Associated Press.

The project, which lasted more than two years and drew tens of thousands of subscribers, sought to evade Cuba’s stranglehold on the Internet with a primitive social media platform. First, the network would build a Cuban audience, mostly young people; then the plan was to push them toward dissent.

Yet its users were neither aware it was created by a U.S. agency with ties to the State Department nor that American contractors were gathering personal data about them, in the hope that the information might be used someday for political purposes.

It is unclear whether the scheme was legal under U.S. law, which requires written authorization of covert action by the president and congressional notification. Officials at the U.S. Agency for International Development would not say who had approved the program or whether the White House was aware of it. The Cuban government declined a request for comment.

White House spokesman Jay Carney said that the program was a “development assistance” scheme designed to allow Cubans facing government restrictions on information access to civil society and was not a secret.

He said the program, first reported by the Associated Press, was conducted within the bounds of U.S. law and had not been a secret, since it was debated in Congress.

“When you have a program like that in a nonpermissive environment, i.e., a place like Cuba, you are discreet [in] how you implement it so you protect the practitioners,” he said.

“But that does not make it covert. USAID is a development agency, not an intelligence agency. Suggestions that this was a covert program are wrong.”

At minimum, details of the program appear to muddy USAID’s longstanding claims that it does not conduct covert actions, and could undermine the agency’s mission to deliver aid to the world’s poor and vulnerable — an effort that requires the trust and cooperation of foreign governments.

USAID and its contractors went to extensive lengths to conceal Washington’s ties to the project, according to interviews and documents obtained by the AP. They set up front companies in other countries to hide the money trail, and recruited CEOs without telling them they would be working on a U.S. taxpayer-funded project.

“There will be absolutely no mention of United States government involvement,” according to a 2010 memo from Mobile Accord, one of the project’s creators. “This is absolutely crucial for the long-term success of the service and to ensure the success of the mission.”

The project, dubbed ZunZuneo, named after a Cuban hummingbird, was publicly launched shortly after the 2009 arrest in Cuba of American contractor Alan Gross. He was imprisoned after traveling repeatedly to the country on a separate, clandestine USAID mission to expand Internet access using sensitive technology that only governments use.

USAID said in a statement that it is “proud of its work in Cuba to provide basic humanitarian assistance, promote human rights and fundamental freedoms, and to help information flow more freely to the Cuban people,” who it said “have lived under an authoritarian regime” for 50 years. The agency said its work was found to be “consistent with U.S. law.”

“There is the risk to young, unsuspecting Cuban cellphone users who had no idea this was a U.S. government-funded activity,” he said. “There is the clandestine nature of the program that was not disclosed to the appropriations subcommittee with oversight responsibility. And there is the fact that it was apparently activated shortly after Alan Gross, a USAID subcontractor who was sent to Cuba to help provide citizens access to the Internet, was arrested.”

The AP obtained more than 1,000 pages of documents about the project’s development. It independently verified the project’s scope and details in the documents through publicly available databases, government sources and interviews with those involved in ZunZuneo.

The project would seem to be a throwback to the Cold War and the decades-long struggle between the United States and Cuba. It came at a time when the historically sour relationship between the countries had improved, at least marginally, and Cuba had made tentative steps toward a more market-based economy.

The social media project began development in 2009 after Washington-based Creative Associates International obtained a half-million Cuban cellphone numbers. It was unclear how the numbers were obtained, although documents indicate it was done illicitly from a key source inside the country’s state-run provider. Project organizers used those numbers to start a subscriber base.

ZunZuneo’s organizers wanted the social network to grow slowly to avoid detection by the Cuban government. Eventually, documents and interviews reveal, they hoped the network would reach critical mass so that dissidents could organize smart mobs — mass gatherings called at a moment’s notice — that could trigger political demonstrations, or “renegotiate the balance of power between the state and society.”

The Cuban government has a tight grip on information, and the country’s leaders have said the Internet is a wild colt that should be tamed. ZunZuneo’s leaders planned to push Cuba “out of a stalemate through tactical and temporary initiatives, and get the transition process going again toward democratic change.”

At a 2011 speech at George Washington University, then–Secretary of State Hillary Rodham Clinton said the U.S. helps people in “oppressive Internet environments get around filters.” Noting Tunisia’s role in the Arab Spring, she said people used technology to help “fuel a movement that led to revolutionary change.”

Suzanne Hall, then a State Department official working on Clinton’s social media efforts, helped spearhead an attempt to get Twitter founder Jack Dorsey to take over the ZunZuneo project. Dorsey declined to comment.

The estimated $1.6 million spent on ZunZuneo was publicly earmarked for an unspecified project in Pakistan, public government data show, but those documents don’t reveal where the funds were actually spent.

ZunZuneo’s organizers worked hard to create a network that looked like a legitimate business, including the creation of a companion website — and marketing campaign — so users could subscribe and send their own text messages to groups of their choice.

“Mock ad banners will give it the appearance of a commercial enterprise,” one written proposal said. Behind the scenes, ZunZuneo’s computers were also storing and analyzing subscribers’ messages and other demographic information, including gender, age, “receptiveness” and “political tendencies.” USAID believed the demographics on dissent could help it target its other Cuba programs and “maximize our possibilities to extend our reach.”

“It was such a marvelous thing,” said Ernesto Guerra, a Cuban user who never suspected his beloved network had ties to Washington. “How was I supposed to realize that?” Guerra asked in an interview in Havana. “It’s not like there was a sign saying, ‘Welcome to ZunZuneo, brought to you by USAID.'”

Executives set up a corporation in Spain and an operating company in the Cayman Islands — well known as a British offshore tax haven — to pay the company’s bills so the “money trail will not trace back to America,” a strategy memo said. That would have been a catastrophic blow, they concluded, because it would undermine the service’s credibility with subscribers and get shut down by the Cuban government.

Similarly, subscribers’ messages were funneled through two other countries, but never through U.S.-based computer servers.

Denver-based Mobile Accord considered at least a dozen candidates to head the European front company. One candidate, Francoise de Valera, told the AP she was told nothing about Cuba or U.S. involvement.

For more than two years, ZunZuneo grew and reached at least 40,000 subscribers. But documents reveal the team found evidence that Cuban officials tried to trace the text messages and break into the ZunZuneo system. USAID told the AP that the project stopped in September 2012 when a government grant ended.

ZunZuneo vanished abruptly, and the Communist Party remains in power — with no Cuban Spring on the horizon.