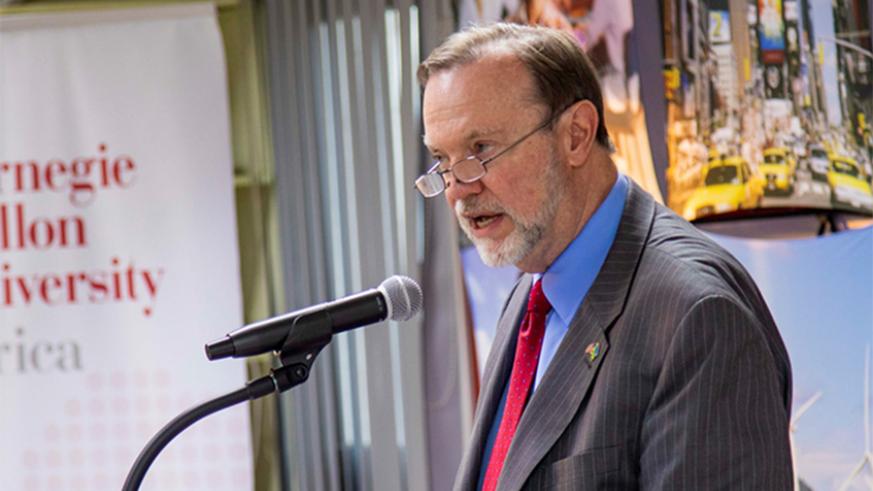 Tibor Nagy, United States Assistant Secretary for the Bureau of African Affairs, who is on a visit to Africa, on Monday met and interacted with students from Carnegie Mellon University (CMU) Africa in Kigali.Prior to this, Tibor had on Sunday met President Paul Kagame, Foreign Minister Richard Sezibera, and Rwanda’s Ambassador to US to discuss building on the US-Rwanda partnership to expand trade and investment partnership and advance regional peace and security.Tibor is in Rwanda as part of his visit to four African countries, which they say is aimed at engaging Africa’s vibrant youth, promote stronger business ties between the United States and Africa, and strengthen partnerships that aim for greater peace and security.The visit is meant to reinforce the United States’ commitment to the people and nations of Africa, according to officials.

The American top diplomat’s interaction with students was ostensibly meant to inspire African youth to take over the lead in development, even though he made a case for his country and talked much about his country’s priorities in Africa.“Today, young Africans and especially young Rwandans are as wired and plugged in as any of their global counterparts. They aspire to the same goals – a quality education, a well-paying job, a good house, and something left over to help their parents,” he remarked.“This trip is a phenomenal opportunity for me to engage with young people, such as yourselves. I tell everyone I talk to, from heads of state, to reporters, business people, and civil society, that engaging Africa’s youth is the key to unlocking sustained prosperity on the continent,” he added.

Tibor who was a US diplomat in Africa for 22 years told the students that harnessing the potential of Africa’s tremendous youth population to drive Africa’s economic growth and create real prosperity was one of his country’s priorities.He highlighted that during his career, he has had numerous interactions with students from Africa, saying they were some of the brightest and most innovative students he has met anywhere.“The question to you is, how we harness the talent and entrepreneurial spirit of young Africans as a force for prosperity and stability?” he asked!The diplomat highlighted that they were keen on investing in education in Africa, something he stated that it is illustrated by the US-Rwanda partnership in education that has seen the establishment of academic institutions like CMU Africa.CMU Africa was born eight years ago out of a partnership between Rwanda and Carnegie Mellon University based in Pittsburgh in the United States. It remains the only US research university offering its Master’s degree with full time operations in Africa.The Government identified a critical shortage of high quality engineering talent required to accelerate development not just in Rwanda but across Africa. The university now has over 250 students from 15 African countries.“Rwanda’s impressive investment in one of most prestigious names in US higher education will yield benefits for years to come. But we all know that a lot of learning takes place outside of the classroom,” he noted, adding that the Department of State’s public diplomacy [JB emphasis] programmes support hands-on learning and mentoring.All of that, he added, is directed towards the next generation of African leaders to enhance leadership skills, bolster entrepreneurship and forge meaningful ties with US counterparts.Nagy is today expected to visit Kigali Genocide Memorial.editor@newtimesrwanda.comOriginal Article