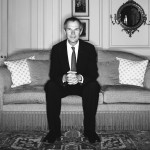 I was delighted recently to attend the HQ of the London Scottish Regiment in Westminster to be awarded with a “Hodden Grey Tam O’Shanter”. How did this happen?

The story begins with my decision in January 2018 to wear my kilt to Austrian President Van der Bellen’s annual diplomatic reception for ambassadors.

This was the second time I had attended the reception. Both times, inspired by my Danish colleague in Vienna, I had cycled to the event rather than taking an official car. The second time, I had cycled in my kilt. The combination appealed to people, including President Van der Bellen himself (who is a keen environmentalist).

In January 2019, I again cycled in my kilt, this time with my new Danish colleague. Again the ride drew some attention, in part because it was a cold and snowy day. Shortly afterwards, representatives of the London Scottish Pipes and Drums got in touch to say that they had noted my actions and my earlier blog “How Scottish was my Great-Grandmother?” and wondered if they might award me an honorary “Hodden Grey Tam O’Shanter”.

Hodden Grey describes the colour of the material of the ToS: originally an unwashed homespun wool worn by crofters, referred to in Burns’ poem “A Man’s a Man”. The colour was worn by the London Scottish Regiment as a form of camouflage after 1859, being less visible than traditional scarlet tunics, and was intended to be more neutral than traditional clan tartans. Haydn designed and now makes the “Hodden Grey Bonnet” himself. I was touched and honoured to be invited to wear one.

Will I wear the Tam O’Shanter to the next diplomatic reception in January 2020? Watch this space.