Interested in representing Ireland abroad? The next generation of diplomats are being recruited 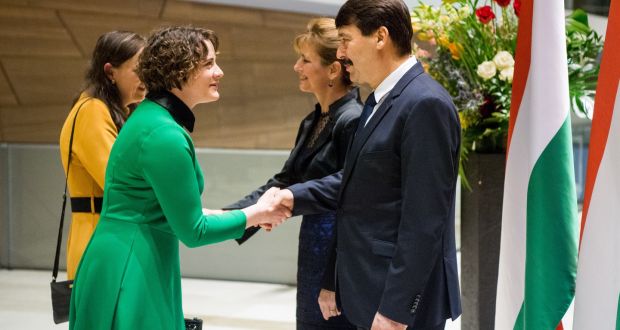 Is there more to being a diplomat than truly spoiling guests at the ambassadorial residence with pyramids of gold foil-wrapped chocolates?

The Public Appointments Service is currently advertising for the next generation of Irish diplomats. Dozens of “third secretary” positions need to be filled at the Department of Foreign Affairs and Trade, the entry level for diplomats in the Irish diplomatic service.

They are seeking “high calibre graduates” who are “interested in representing Ireland abroad, promoting and protecting the interests and values of our State and its citizens”. People with foreign language skills, and qualifications or experience in international relations, economic and trade promotion, and development cooperation are particularly welcome, according to the ad.

So what can applicants expect if they get the job? We asked three working in different levels of the Irish diplomatic service to tell us what their role involves.

I joined the Department on November 3rd 2000 and I’ve loved every minute since, but if I had to describe my experiences of working as an Irish diplomat in just one word, is would be: “Variety”.

I’ve had the great privilege of working for Ireland in the Netherlands (four years), Slovenia (two years) and Austria (five years). Through my work, I’ve got to visit 30 countries on almost every continent.

Just as there has been a variety of countries, there has been an amazing range of different work to do. I’ve processed passports and visas, and visited Irish people in foreign jails and hospitals. I’ve helped families return the remains of loved ones who have died in tragedies abroad. After major disasters such as 9/11 and the terrorist bombings in Bali, I’ve helped Irish families locate their loved ones.

I’ve had the good fortune to participate in international discussions that have focussed on economics, politics, culture and education.

I’ve had to become an expert on a bewildering array of different topics, including war crimes tribunals and defending human rights and fundamental freedoms, on cyber security and countering illicit drugs and terrorism, on conventional arms control and confidence and security-building measures, on combating corruption and climate change, on UN sanctions regimes and the EU’s Common Agricultural Policy.

In my current role, I help to organise visits to Ireland by high level foreign dignitaries such as presidents, prime ministers and members of royal families, and in this, I’ve got to meet some very interesting (and famous) people. The photo above shows me waiting for the arrival of the Duke and Duchess of Sussex – aka Prince Harry and Meghan Markle – at the Epic Museum in Dublin.

I’ve been lucky to work with and for some outstandingly talented people. In those teams I’ve worked with and sometimes led, I’ve always found my colleagues to be not only clever and intelligent, but also hard-working, good humoured and absolutely determined to do their best to promote and protect Ireland’s interests in the world.

Put simply, the new third secretaries who will start in the Department after this recruitment campaign will join a great team, with amazing career opportunities that literally cover the globe. I couldn’t recommend it enough.

Marianne Bolger, deputy head of mission at the Irish Embassy in Athens

I joined the Department of Foreign Affairs and Trade as a third secretary almost 17 years ago, following two years working in the Department Justice and Equality. Over that time, I have worked in four different areas at the Department’s headquarters and I am currently on my third posting abroad here in Athens, having previously served in Stockholm, Sweden and Boston.

I live just outside Athens with my husband, Stephen McNally, and our three children, who are thankfully all up for the many great adventures and sometimes challenges that moving and living abroad can bring.

What I most enjoy about my job is being part of an organisation that strives to make a difference on an international stage, including in areas like reconciliation and peace building, disarmament, human rights and our development aid programme. I also really enjoy the variety of work the role offers, as well as the opportunities to travel and represent Ireland abroad, including looking after our citizens across the world and interacting closely with Irish communities and organisations promoting Ireland abroad.

Coming from a proud tradition of firefighters on my dad’s side of the family, I think that my ability to remain calm under pressure and a desire to help people are attributes that are very useful in my role as a diplomat, and in particular were required in my last role in Dublin where I was assigned to our Consular Division, which included responding to crisis situations abroad.

I have also been involved in a number of exciting projects over the last few years which seek to make the Department more effective, including on improving customer service delivery. I have also contributed to developing the Department’s approach to equality and diversity, to help ensure the staff is fully representative of Irish society, and the Department is an inclusive place to work.

Working with the JFK Library in Boston in 2006 to organise a special exhibit on John F. Kennedy’s visit to Ireland in 1963 was a memorable highlight. More recently, I was especially proud to be part of the Embassy team in February during the state visit by President and Sabina Higgins to Greece, where my role included organising a business event, and a visit to Eleonas Refugee Camp in Athens.

I joined the Department of Foreign Affairs and Trade as a third secretary in 2014, and have had the opportunity to work at the Department’s headquarters in Dublin, our Embassy in Beijing, and now Budapest.

I am really proud to be an Irish diplomat and to get to represent Ireland in my everyday work – be it organising the Taoiseach’s visit to Hungary last January, hosting cultural events, supporting Irish business, or helping Irish citizens.

I graduated from UCC with a degree in Law and French in 2009 and was eager to study abroad, having spent an Erasmus year in France. I did a Master’s in EU Law at the College of Europe in Bruges, and went on to spend four very happy years working in Brussels in a variety of roles, but was always interested in being a third secretary.

What I love about my job is that no two days are the same. Today, for example, I was helping an Irish boy who had lost his passport while inter-railing. We provide assistance to Irish citizens who get into trouble abroad, which can range from a stolen bag, to a more serious accident. It is a very challenging part of my work, but very rewarding.

This evening I will be hosting our monthly Embassy Book Club. I started this initiative in 2017 and it has been a great success. We only read Irish authors and it’s a fantastic way to bring people together and introduce them to Ireland. This month we read The Heart’s Invisible Furies by John Boyne.

The staff in our Embassies and Consulates are a mix of Irish diplomats, civil servants and local staff members. The local staff are an amazing asset to our work, helping us to navigate local customs and traditions.

Celebrating St Patrick’s Day abroad is always very special. It’s a unique opportunity to promote Irish culture, food, and tourism to a worldwide audience. March is our busiest time of year and here in Budapest there is an annual St Patrick’s Day festival, which includes a parade down Andrassy Avenue, Budapest’s most famous boulevard. I was really honoured to play a part in organising the Greening of the Chain Bridge in 2017 and 2018, a symbolic celebration of Irish-Hungarian relations.

Another important aspect of my job is reporting on political developments in Hungary, and especially anything EU related. At the moment Brexit is an important topic, and I work with the Ambassador to keep the Hungarian government briefed on Ireland’s positions, and the importance of the border to peace and security.

I love languages and I’m currently learning Hungarian – it is difficult but I have a great teacher and it’s nice to be able to exchange some words with my Hungarian colleagues and friends. I speak Irish, French and a little bit of Dutch, and as a third secretary, I have access a wide range of language and other training.

This year I took part in the European Diplomatic Programme, run by the EU for diplomats from all 28 member states. The programme took us to Tallinn, Brussels and Sofia, and I also visited Helsinki for a three-day study visit to learn more about how the Finnish ministry for foreign affairs works. It was really beneficial to meet diplomats from across the EU and to learn from each other.

One of the best things about working in the Department is the people. I’ve made fantastic friends in this job, who are only ever a phone call away when you need some advice or guidance. And of course, there are many advantages to having friends all over the world to visit.

I’d recommend this career to anyone who is up for adventure, hard work, excitement and representing your country abroad.

Applications for the third secretary positions at the Department of Foreign Affairs and Trade close on August 9th. See publicjobs.ie