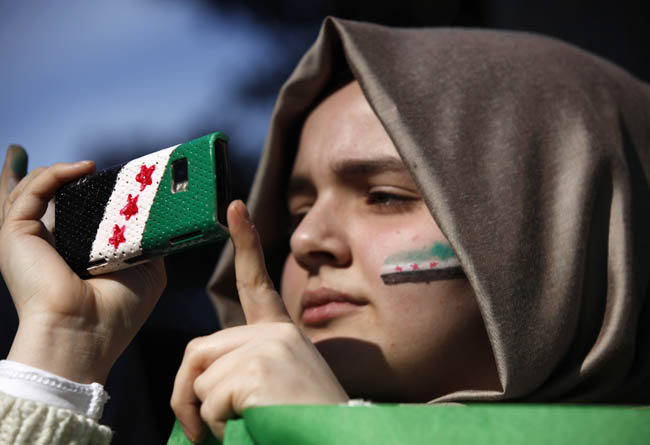 When I was 19 I read about Plato’s Theory of Forms. The theory, crudely put, argues that everything exists in a metaphysical realm in its ideal form, and that everything we have on Earth is a poor attempt to imitate the ideal. So, a cat on Earth is a poor imitation of the ideal cat; and a picture of the earthly cat is even more imperfect because it is even further away from the ideal.

I’ve been thinking about the Theory of Forms in relation to how conflict is presented through social media. For it seems to me that social media has gained prominence as a medium of conflict reportage because it is seen as closer to reality – or, in Platonic terms, closer to the conflict in its purest form. Traditional media, with its serious reporters, analysts and montages, seems further away from the truth of the conflict: it’s a dilution of the purity of the on-the-ground reality.

When I occupied the department store Fortnum Mason with 145 other people in 2011, word came that the BBC was erroneously reporting that we were rioting inside. To counter that claim I started tweeting pictures of protesters sitting around reading and chatting to staff, and I received messages from people thanking me from providing them with the “real” news.

But were my tweets “real”? There could have easily been a riot taking place a few feet away (there wasn’t), and ultimately there was no sound reason for people to believe me rather than the BBC. But I was seen as instinctively more trustworthy, partly because my rudimentary amateur photos seemed more authentic: a more truthful rendering of the protest than what the mainstream media had to offer.

The ultimate example of this is probably the Arab spring, most notably the Egyptian revolution of 2011, which has since spawned a Wikipedia page, “Twitter revolution”. In Egypt, where the news media was censored and communication lines cut by compliant telecoms companies, social media was a way of disseminating the reality of revolution to a watching world. The Egyptian state was so determined to suppress communication that using social media was a dangerous act of defiance, and in that sense it seemed purer and more honest.

In 2011 Peter Beaumont wrote that the defining image of the Arab spring was “a young woman or a young man with a smartphone“. And sure enough, later in the piece is a photograph of a young Bahraini woman holding up a smartphone displaying a photo of an injured protester. The tacit assumption is that the woman took the photo after witnessing the injury take place: she was close to the reality of the situation, and her photo is the conflict in its purest form.


The rise of social media in conflict situations – not just Twitter, but Buzzfeed, Instagram, YouTube and others – reflects wider trends in the Millennial generation (or Generation Y – people aged between 18 and 33). According to the US thinktank Pew Research, Millennials are “relatively unattached to organised politics and religion, linked by social media, burdened by debt [and] distrustful of people”. It’s not surprising, then, that new platforms like Buzzfeed have become modern-day news outlets. They seem more anti-establishment, more democratic, zeitgeisty and – with their messy, colloquial format – somehow more honest than traditional media.

But although new or social media has played an important part in bringing us closer to the “real” during conflict, it can also take us further away. Constantly viewing conflict on a Buzzfeed list or Instagram filter can also make it seem unreal, or what cultural theorist Jean Baudrillard might have called the “hyperreal”, an exaggerated version of reality which ultimately blurs the boundaries between reality and simulation altogether. Baudrillard would even go so far as to suggest reality is a pointless byproduct in the rush to create or share an experience. Perhaps people Instagram protests because preserving real-life occurrences with a vintage filter now feels more authentic than actually living through them. Perhaps we’re so used to the Arab spring narrative of protest that it seems more real to apply that to any unfolding conflict than to understand the real-life context.

In the recent protests in Venezuela, the rightwing opposition has exploited social media to present an image of a progressive popular uprising against a regressive and authoritarian government. As Central European University professor Julia Buxton wrote, “Despite claims that social media ‘democratises’ the media, it is clear that in Venezuela it has had the opposite effect, exacerbating the trend towards disinformation and misrepresentation, with overseas media groups and bloggers reproducing – without verification – opposition claims and images of student injuries allegedly caused by police brutality and attacks by government supporters.”

A Buzzfeed list of 27 “heartbreaking” images of the Venezuelan protests was created, and shared by progressive activists around the world. Perhaps those activists would have been more reticent had they known the Venezuelan opposition largely consists of the country’s elite and has been responsible for violence, including beheading a pro-government activist, and that youth organisations, rather than being a spontaneous grassroots uprising, have been backed by the US, including one student leader receiving a $500,000 Milton Friedman prize in 2008. But the Venezuelan opposition was able to slot into existing protest narratives of brave and dynamic protesters rising up against tyrannical regimes.

Huw Lemmey, who has examined the Israeli Defence Forces’ Instagram accounts, writes, “perhaps we should have predicted that War 2.0 would look less like Starship Troopers than the early drafts of a footwear campaign or a coffee franchise loyalty-card scheme.”

A Bahraini Shia protester near Manama in 2012. Photograph: AFP/Getty Images


To what extent does social media allow aggressors to co-opt conflict and then present it as something sexy? The most extreme example here seems to be Syrian president Bashar Al-Assad’s Instagram account, in which he is pictured with his beautiful wife interacting with the common people. As Emily Greenhouse put it in the New Yorker, “we follow Taylor Swift even though we wouldn’t admit it … what does it mean to follow a man strongly suggested to be a war criminal, to have a virtual shrine to a dictators’ glory that can fit in our pockets?”

It’s worth asking whether the accessible nature of social media normalises conflict, particularly in this era of social upheaval, and encourages us to internalise it as background noise. If we can flick between Taylor Swift and the Syrian civil war, what does that say about the level of serious interest we take in the Syrian civil war?

It’s true that in Fortnum Mason, the protesters were misrepresented by traditional news media, and social media was a welcome antidote. At that time, the pure on-the-ground reality of the protests was hugely important, as that was the terrain upon which our legitimacy as protesters was being fought (that is, where we wanton criminals or conscientious activists?). Without social media, the protest may have been permanently misrepresented as an act of mindless criminality.

But social media, like traditional media, is ultimately just a medium which can exploited like any other – and conflict is not just about images of violence. It is about history, culture, politics and relationships, none of which can be expressed by an Instagram photo of a battlefield. Ultimately, images of an unfolding conflict are not a pure form because they lack context. And the danger with sharing them is that eventually someone with an agenda might just come along and apply a context of their own.