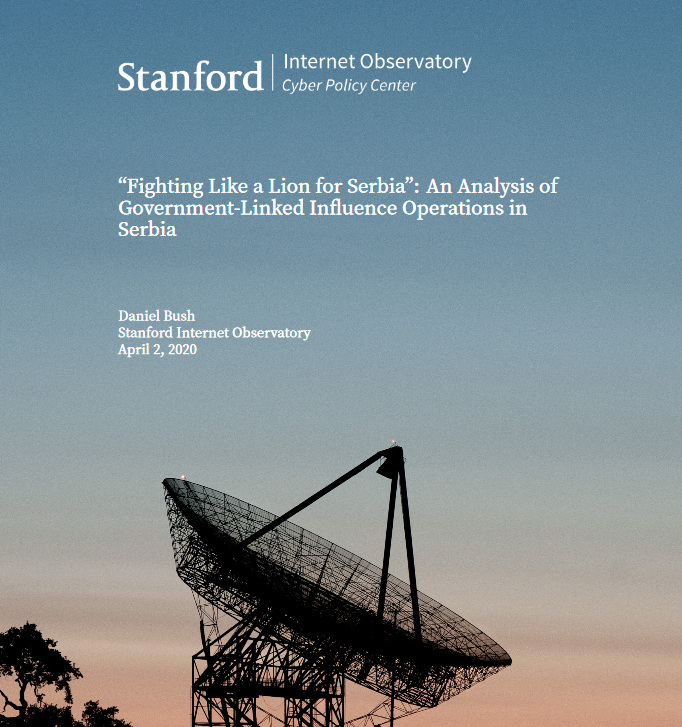 On March 26, 2020 Twitter announced a takedown of accounts targeting Ser- bian Twitter users. Twitter reported that this network—consisting of approxi- mately 8,500 accounts and more than 43 million tweets—acted in concert to cheerlead for President Aleksandar Vučić and his party, to attack his oppo- nents, and to boost the popularity and visibility of other content serving these ends. In this paper, we describe the contours of this operation and the tactics it used to achieve its aims.

The data provided by Twitter reveals an extensive campaign to influenceSerbian Twitter users. More than 8,500 accounts worked over the course ofseveral years—ramping up their activity in mid-2018 and 2019 in particular—toboost the SNS and its leader, Aleksandar Vučić. They did this by retweeting andposting cheerleading replies to Vučić-aligned tweets (more than 12.5 millionretweets of pro-Vučić accounts); by sharing links to content on Vučić-alignedwebsites (more than 14.8 million links); and by attacking Vučić’s opponents,especially the Alliance for Serbia. While a precise connection between thisnetwork and SNS has not been established, there can be no doubt, given thecontent these accounts shared and the time period in which they were active,that this network was intended to boost Vučić’s election chances in early 2017and to combat the “1 of 5 Million” protests in 2018-2020