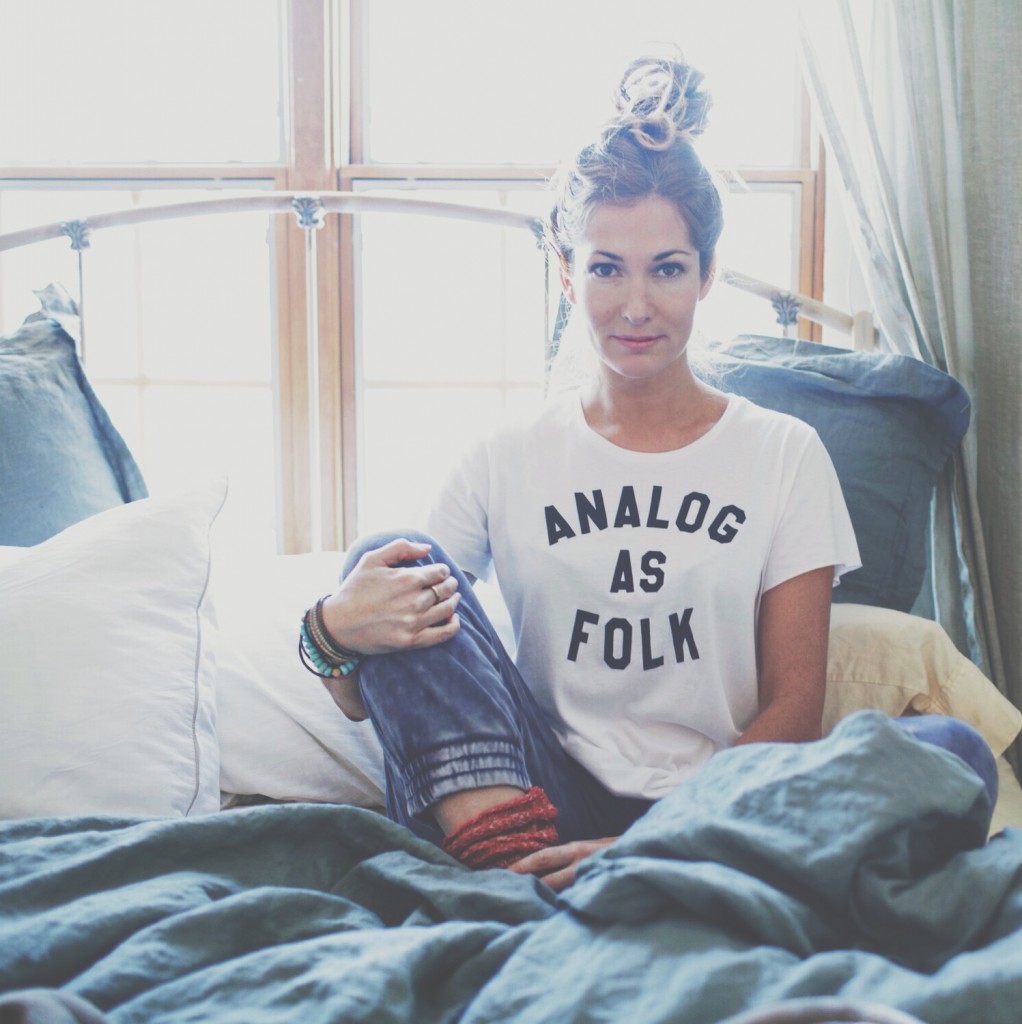 Jess Davis, a former digital brand strategist, was your typical super plugged-in New Yorker, when suddenly last year, she felt a sharp decline in her energy, memory, and creativity levels.

“I experienced a major burnout,” Davis explains. “I went to go see doctors and had blood work done, and no one could figure out what was wrong with me.”

In June 2014, Davis went on a trip with her husband and son to Hawaii, where her husband locked away her laptop, iPad, and cellphone. “I was so mad the whole week,” she admits. “But I remember it so vividly. On the eighth day, I woke up feeling so aware. I could hear the waves, and smell the salt. I hopped out of bed and finally felt like my old self again.”

The t-shirts—with messages like “Analog As Folk”—as well as inspirational stories and tips featured on the Folk Rebellion website, support this by promoting balance and awareness around technology.

Of course, Davis is still a businesswoman, and she understands that many people (herself included) can’t totally unplug while making a living. But she believes mindfulness helps us control technology instead of it controlling us—especially in the fall as work kicks into high gear.

“People come back refreshed from summer, and so do bosses,” Davis says. “Everyone is ready to hit the ground running. It’s the last business quarter, and you’re closing out the end of the year. You can very easily fall back into that technology trap. But if you don’t hit pause at some point, you’re going to fry.”

Here are Davis’ tips for remaining mindful around technology—which will ultimately lead to higher personal satisfaction as well as boosted productivity and quality of at work (yes, really!). —Jamie McKillop

1. Do a digital detox cleanse. On the weekend, unplug all of your devices to see how much they’re really affecting you. “I equate this feeling similar to that first bite of food after a juice cleanse,” she says. “That feeling gives you an awareness you may not have had before.”

2. Set boundaries. “Remember, a lack of boundaries welcomes a lack of respect,” Davis advises. “If people think that they can get a hold of you whenever and however (hello boss’ texts at 11:00 p.m.), they will.”

3. Reset your circadian rhythm. Pings, vibrations, and buzzes have us trained like Pavlov’s dogs. “There is an addictive feel-good jolt or buzz from hearing that sound,” she says. “But always being on alert and reacting to whatever the virtual world throws at you doesn’t allow quality space for the yummy human stuff.” As a solution, make your nights and mornings device-free so you can reconnect with your mind, body, soul, and world.

4. Get rid of the gateway drug, er, app. “I could stand in line at Sweetgreen and [refresh my email] 20 times before I even place my order,” Davis admits. “Twenty minutes later I’m on LinkedIn checking my messages as a last resort because there is nothing left for me to refresh.” As a solution, steer clear of your gateway app when you head to lunch, a date, or family time.

5. The best defense is a good offense. “Ironically, take to social media to let your friends know that you will be responding to texts, pings, Snapchats, or whatever within 24 hours,” she says. “Check your emails at certain times only throughout the day to avoid being shackled to your inbox. Get away with it by telling clients and coworkers… The more you set people’s expectations about how you will be digitally interacting the easier the transition will be.”