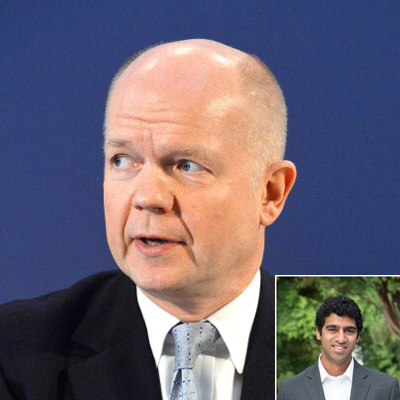 The Foreign Secretary had asked his followers to tweet a response to the question: “What do you think is the biggest contribution UK foreign policy can make to the world?”

The Foreign Secretary selected Gopal’s entry from over 120 responses submitted.

Gopal’s entry was one of a number of noteworthy suggestions, including:

Social media is a vital part of modern diplomacy, allowing Ministers and diplomats to engage directly with global audiences. The Foreign Secretary said after the meeting that: “Through social media politicians have opportunities to engage a wider group of people than ever before, and this was a perfect example of the value of this”.

At the FCO Communications Conference earlier this year, the importance of social media to diplomats was explained by High Commissioner Christian Turner who tweeted:

This week’s event follows on from a meeting the Foreign Secretary hosted with five of his Twitter followers in October 2012 on reaching 100,000 followers.  After that meeting he tweeted: “After this #meetfs I’m even more enthusiastic about the value of Twitter and social media in diplomacy and politics”.