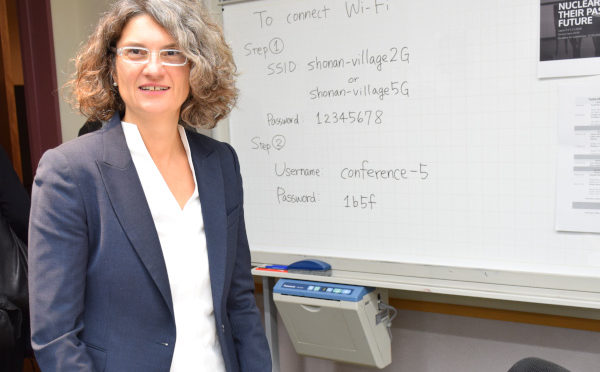 uncaptioned image [of Rentetzi?] from article
What nuclear science has to do with diplomacy? In November 2018 twenty historians of science and technology joined for the first time a workshop in Japan in order to answer the question. As modern foreign policy and international relations encompass more and more scientific issues, we are moving towards a new type of diplomacy, known as Science Diplomacy and in our case Nuclear Diplomacy. Will this new diplomacy of the 21st century prove to be more effective than past diplomacy for the big issues facing the world, such as nuclear power and weapons?The workshop in Japan was an initiative of Greek Professor Maria Rentetzi, Director of the Laboratory for History and Philosophy of Science and Technology at the Department of Humanities, Social Sciences and Law of the National Technical University of Athens. Together with her Japanese colleague Kenji Ito, Associate Professor at SOKENDAI University, they are the organizers of a two stage workshop, meeting first in Japan during November 2018 and next in Athens, Greece in May 2019. Their aim was to bring together scholars working on the history of nuclear sciences and the role of international organizations in shaping nuclear diplomacy with historians of diplomacy and political scientists, focusing on the ways nuclear scientists and engineers have contributed, and, continue to do so, in international negotiations.“The Nuclear Diplomacies workshop was the beginning of what I call the diplomatic studies of science. That is the study of science and technology in close relation and in historical perspective to diplomacy” explains Prof. Rentetzi. By placing both science and technology in a black box, the mainstream narrative suggests that they could be both turned to key tools in diplomatic negotiations and be used as promoters of national interests. Instead, as Prof. Rentetzi explains, scholars in the Japan workshop questioned the instrumental use of science in diplomatic affairs and reminded us that science and diplomacy have always been co-constructed within a multilateral and highly complex international context.Especially, during the postwar era the epistemic and the political have been entangled, something that the Nuclear Diplomacies’s participants tried to decipher by using diplomacy as their main category of analysis in nuclear history. During the workshop among the discussed topics were nuclear diplomacy in and around international organizations such as the IAEA, bilateral negotiations as well as public diplomacy [JB emphasis] in relation to exchange of material and human resources, science diplomacy concerning radiation protection, nuclear safeguards, and technical assistance programs and the historical role of diplomats and science/technical experts in negotiating nuclear agreements.Professor Maria Rentetzi, the former science diplomacy adviser to the alternate minister of foreign affairs in Greece, leads the work package on security and science diplomacy of a European project entitled InsSciDE and is the principal investigator of a 2 million euro grant (ERC Consolidator) on the history of radiation diplomacy and the International Atomic Energy Agency (IAEA). InsSciDE is a Horizon 2020 funded project ​focused on the development of a shared science diplomacy across Europe through international, interdisciplinary and groundbreaking research. The project aims to create an inclusive and innovative dialogue, highlighting the contribution of Science Academies and networks of Science Diplomats to addressing global challenges.Professor Rentetzi’s ERC project questions the ways the International Atomic Energy Agency, a diplomatic and political international organization, came to dominate scientific institutions with a long tradition in radiation protection. “Despite the importance of international organizations for the development of postwar science” says Prof. Rentetzi, “there is hardly any work on the history of radiation protection in relation to the development of the IAEA. My ERC project addresses this lacuna in a groundbreaking way. I analyze what is usually treated as a strictly techno-scientific issue—how best to protect us from ionized radiation—using methods from history, philosophy, and sociology of science, and in the context of international history.” She advocates a “diplomatic turn” in history of science and is expected to lead a highly interdisciplinary project, bringing together expertise from several disciplines and promising a significant advancement across them.The second Nuclear Diplomacies workshop will be held in Athens from 8 to 10 May, 2019 and will introduce for the first time the theme of science diplomacy to the Greek academic community and to the public. Still in its early stages of planning, the workshop will bring together once again the same scholars that participated in Japan to discuss their final contributions to History and Technology, a leading journal in the field. During the launch event, an open panel of experienced science diplomats and historians of science it is expected to debate the past, present, and future of science diplomacy.Photo courtesy Nozomi MizushimaOriginal Article