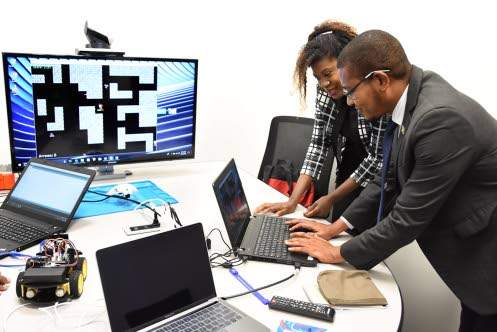 Image from article, with caption: THE development of the creative industries,
entrepreneurship and social enterprises in the island, or at least in Kingston, are expected to get a boost from the rebranded Robeson American Center, which opened its doors in the capital on Tuesday.
After upgrading work over several months, the centre — formerly Paul Robeson Information Resource Center — now has a technology focus and features robotics kits, a 3-D printer, python coding software, and multimedia video conferencing equipment. They, together with new modular furniture and layout, are designed to facilitate innovation clubs with a focus on science, technology engineering and mathematics (STEM) and entrepreneurship, as well as robotics and python coding workshops.
State minister in the Ministry of Industry, Commerce, Agriculture and Fisheries Floyd Green sees potential in the new offerings, particularly for schools and communities in proximity to the centre, which is housed at the US embassy in Kingston.
“I do want to suggest that we spend some time to help facilitate our young people who are interested in the creative arts. It is an area of industry that we often downplay and it's an area that we have a natural advantage in, as a people, and [with] this wonderful space, [let us see] how we can infuse the technology into our creative arts industry to ensure that all the people in and around the communities that surround the embassy and further afield can bring life to their creative ideas. I would love to see that happen right here,” he said at the relaunch.
Green, who was state minister in the education ministry a week ago, applauded the embassy for the focus on STEM and innovation, reiterating previously made arguments that Jamaicans ought to be creators of technology and not merely consumers.
“We want our people to lead in areas such as robotics, and the talent is here,” he added, making reference to a robotics team from Jamaica College which won the highest award — the Inspire Award — in the FIRST Tech Challenge Relic Recovery Challenge in New York City in 2018.
The school has been fielding teams in the competition since 2009, and has won awards at different levels.
“Imagine when we ensure that Papine High, Mona High, and the primary schools, get that introduction into robotics!” Green continued, urging the Robeson American Center to invite primary schools that would not normally have access to such technologies to participate in its programmes.
Green also argued that the Robeson American Center had the potential to advance small- and medium-sized businesses across the country, and suggested that it could facilitate engagement between young entrepreneurs from both countries.
“There are so many entrepreneurs across Jamaica. Every corner you go somebody is speaking about a business plan. Sometimes, the plan is directed in the wrong direction, but don't get it wrong, they are business ideas, and when we give them the opportunity for those ideas to come to life in a legal way, we will all be better off,” said Green.
The state minister also expressed hope that the Robeson American Center could train members of youth clubs in social enterprise management “so they can transform that club into a business that can sustain itself and sustain the members”.
In addition to the technological thrust, the centre will continue to provide Education USA advising, US programme alumni engagement, film screenings, public lectures, and access to a diverse collection of books and other literature.
Counsellor for public affairs at the embassy Jeremiah Knight indicated Tuesday that the rebranding of the centre was in line with the worldwide move in respect to American spaces, and added that the Jamaican public also played a role.
“Before we decided on what we were going to do, we decided on sending out a survey not just in Kingston, but across Jamaica, getting their opinions on what they would like to see as offerings for a resource centre. Based on their opinions, we decided to create clubs and engagement packages around what they told us they would like to see. And to make it more enticing, we decided to make it more modern to speak to the innovation that we are trying to push for,” he told the Jamaica Observer.
It was important, the embassy said, to involve the public in the decisions because, as acting chargé d'affaires Mark Seibel articulated, community is the cornerstone of American Centers, which number some 650 around the world.
“Community building, sharing information, sharing spaces for innovative approaches to modern-day challenges all play a role in developing the US Government's public diplomacy objectives and carrying them out in Jamaica.
“The Robeson American Center serves to build bridges between the people of the United States and the people of Jamaica, by increasing mutual understanding, collaboration and partnership through community-focused programmes and activities… [and it] promotes the values of openness and accessibility,” Seibel said.
Tuesday's relaunch was followed yesterday by robotics and python demos. The former was led by electrical engineering lecturer at Mico University College Wayne Thompson, while head of information technology at the University of the Commonwealth Caribbean Natalie Rose led the latter.
Original Article