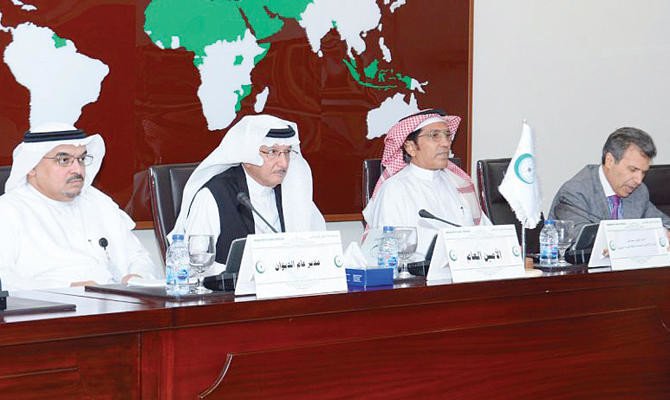 Image from article: Dr. Yousef Al-Othaimeen, secretary-general of the Organization of Islamic Cooperation, chairs the session on public diplomacy in Jeddah on Friday.

JEDDAH: The Organization of Islamic Cooperation (OIC) on Friday staged a lecture in the Kingdom on public diplomacy [JB emphasis].
Delegates attending the event, held at OIC headquarters in Jeddah, included senior OIC officials and general secretariat members, and diplomats based in the city.
Titled “Public Diplomacy, Impact of Soft Power and Reinforcement of Mental Picture,” the lecture was part of a monthly intellectual series of presentations organized under the direction of OIC Secretary-General Dr. Yousef Al-Othaimeen.
The lecture was run by Ambassador Ali Quwtali, the OIC director for Palestine and Al-Quds Affairs, and delivered by Saud Kateb, a Saudi writer and undersecretary for public diplomacy at the Ministry of Foreign Affairs.
During his talk Kateb highlighted an article on the subject he had written for Al-Madina newspaper in 2016. “It is when we hide our faces that others paint it as they please,” he told delegates, praising Saudi Arabia’s efforts to showcase the country’s diversity to the world.

Image (not from article) from, under the title, "Veiled women in Saudi Arabia"
Kateb’s highly visual presentation noted that public diplomacy had a major role play in raising the media profile of the Kingdom.
Al-Othaimeen said the lecture program aimed to enrich attendees, and he added that the first OIC Festival held in Cairo earlier this month, had expressed the diversity of the Islamic world.
Public diplomacy is the promotion of ideas and national interests by informing and educating people around the world through cultural activities, exchange programs and social media.
Saudi Arabia is also making sincere efforts to facilitate greater and easier access for cultural diplomacy to take place through international tourism.
Original Article