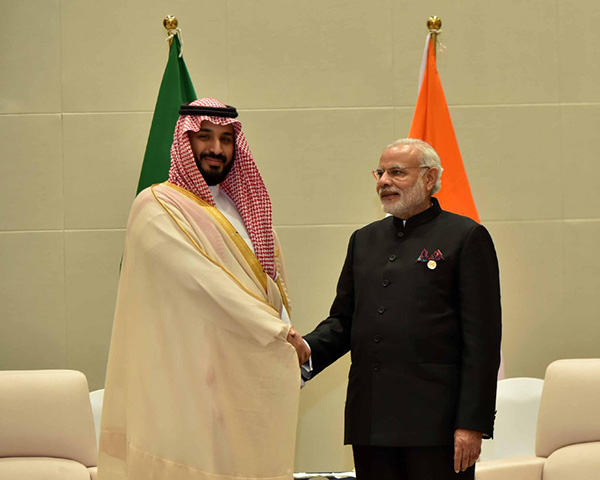 image from article
Crown Prince Mohammed Bin Salman (MBS), arrived to India on Tuesday to discuss about matters to strengthen ties between the two nations. The prince was welcomed by Indian Prime Minister Narendra Modi who even broke the protocols to welcome the prince. Popularly known as MBS, the crown prince arrived at New Delhi airport with his ministers on Tuesday evening.

Apart from strengthening business ties, MBS said that one of the major concerns of the two nations will be to combat terrorism. He added that even intelligence information will be shared if required to put an end to terrorism. Both Modi and MBS added that there is urgent need to increase pressure on countries that support terrorism.Saudi Arabia also became the 73rd nation to sign the International Solar Alliance which was unveiled by Narendra Modi and former French President Francois Hollande in 2015. Modi added that he extends his warm welcome in Saudi Arabia joining the alliance.“Breaking protocol for a cherished friend! PM @narendramodi personally welcomes Crown Prince of Saudi Arabia HRH Prince Mohammed bin Salman bin Abdulaziz Al-Saud on his first visit to India. A quick perusal of the broad-based ties between #IndiaSaudiArabia”, tweeted Indian Diplomacy [JB underlining], official account of India’s Public Diplomacy, Ministry of External Affairs.MBS even added that Narendra Modi is like an elder brother to him, and that he admires the Indian leader. MBS was on a visit to Pakistan before arriving to India. He met Pak Prime Minister Imran Khan where they discussed ways to strengthen business ties between the two nations. Reportedly, MBS ordered for the release of over 2000 Pakistani prisoners in Saudi Arabia has part of extending his love and affection to the country.
Original Article