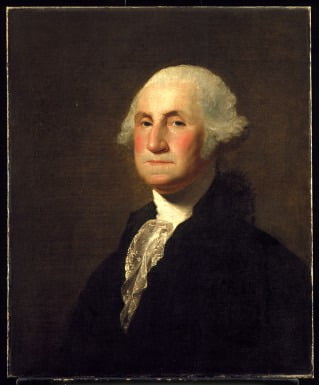 As the first President of the United States, George Washington established precedents in every aspect of his administration. Diplomacy was no exception. Washington believed that negotiation was vastly preferable to any other pursuit, and he followed this ideology and took the leading role in diplomatic relations during his presidency.

The major diplomatic issues facing Washington included American western settlers’ conflicts with the Creek Nation, the resolution of problems derived from the Treaty of Paris of 1783 that ended the Revolution, and the war between Great Britain and France.

Upon assuming the Presidency in 1789, Washington almost immediately began treaty negotiations with the Creek Nation. Settlers in several southeastern states were fighting skirmishes with the Native Americans primarily over American land expansion. Holding this land was, in Washington’s estimation, a federal matter and a treaty was signed with the Creek. Under the document’s provisions, the Creek were paid for their land and re-settled in federally-protected areas. Secretary of War Henry Knox finalized the treaty, covering lands in modern-day Alabama, Florida, Georgia, and Mississippi. Only afterward did Washington ask for Congressional approval.

At the start of Washington’s second term in February 1793, France went to war with Great Britain and its allies. This set up a complex situation for the new American nation that gained independence from Great Britain, yet relied on its former mother country as an important trading partner.

Washington resisted the inclination to support the French, America’s stalwart Revolutionary War ally. Instead, he set a precedent by insisting that the United States remain neutral when foreign nations went to war. In addition, Washington claimed that the President had the right to determine this policy.

Washington moved cautiously to seem neutral because he knew that the United States remained militarily vulnerable. In actuality, for many reasons, Washington leaned towards Great Britain. To this end, he worked with Alexander Hamilton to develop the Jay Treaty to normalize trade relations with Britain, resolve financial issues, and settle western land claims. Washington sent John Jay overseas for negotiations without legislative approval.

As a result of the 1794 treaty, the British abandoned their forts around the Great Lakes (yielding additional lands to the United States), numerous pre-Revolutionary debts were canceled, and American traders were declared free to trade with Britain’s West Indies colonies. Importantly, the treaty delayed war with Britain (eventually occurring in 1812), and established America and Britain as mutually-benefiting trade partners. Jeffersonians strongly attacked the treaty, favoring relations with France. However, the treaty was ultimately ratified in the Senate.

The treaty did have some negative outcomes as American relations with France deteriorated afterward. In addition, the bitterness over the treaty was one of the causes for the development of American political parties and the extreme partisanship that cropped up during the years of the Early Republic. However, in total, Washington proved an able diplomat and established the presidency on a strong footing for the nation’s future travails.