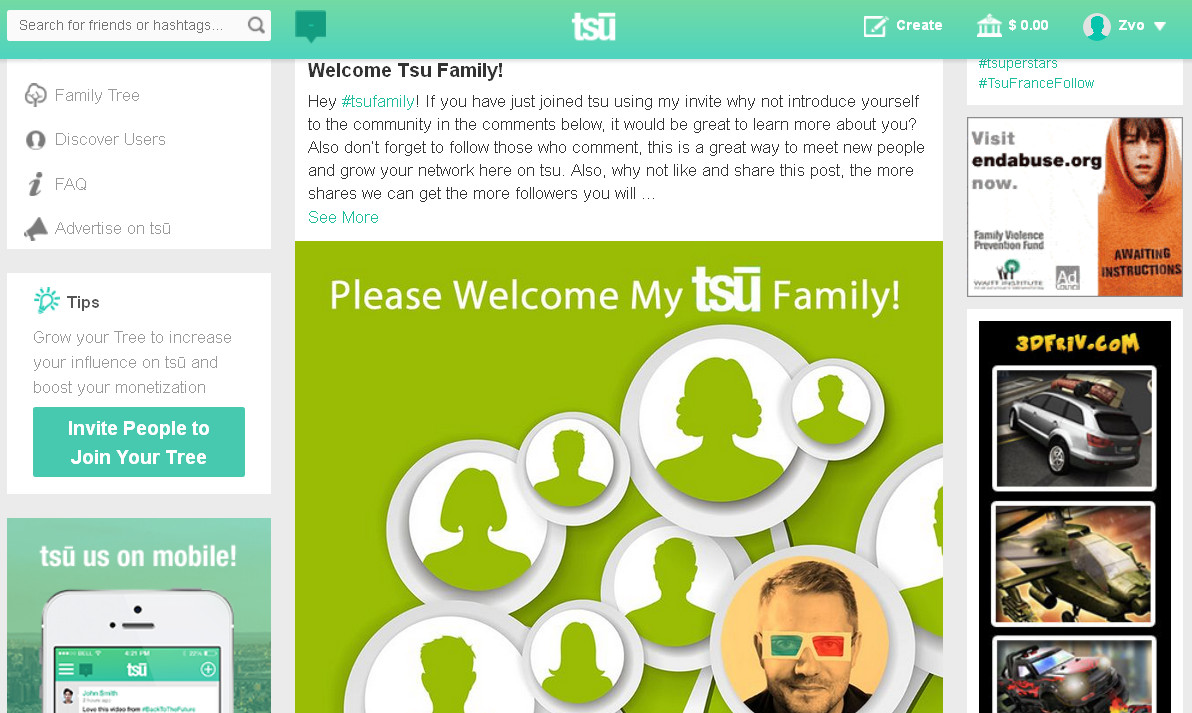 Asked about the inspiration for Tsu, the social network he’s just launched, Sebastian Sobczak doesn’t immediately mention Facebook or Twitter. Instead, he talks about Ed O’Bannon.

Mr. O’Bannon, a former U.C.L.A. basketball player, sued to challenge N.C.A.A. rules banning athletes from making money from their own images — in August, the Supreme Court decided in his favor. And for Mr. Sobczak, he’s a sort of personification of Tsu’s ethos: People should get paid for the content they produce.

While Facebook and Twitter have been criticized for failing to share their profits with those who post on their platforms, Tsu pledges to do just that: It will give 90 percent of its ad revenue back to users.

Tsu’s philosophy is that “all content creators, which is basically every social user, should receive royalties for the commercial use of their image, likeness and work,” Mr. Sobczak told Op-Talk. “They essentially do all the work, they should get rewarded with the lion’s share.”

“What people don’t realize is how much value is created by these platforms on the backs of basically everybody’s networking,” he said.

“It’s the exact analogy to the N.C.A.A. If the N.C.A.A.’s going to be paid hundreds of millions of dollars by gaming companies using Tim Tebow or Ed O’Bannon,” he added, then “you gotta pay the guys!”

Tsu plans to pay users not only for its content, but also for its ability to bring in more people. Each user gets a unique code that allows him or her to invite others to the site. And after Tsu takes its 10 percent cut, it gives half of each post’s revenue to the user who posted it — the remainder gets divided up among the users that person invited, the users those users invited, and so on, the share diminishing with each remove from the original poster. So even if your posts aren’t generating much revenue, or if you’re not posting much, you can still make some money from the posts of the people you know. “If you brought value to the system” by inviting someone whose posts get a lot of attention, said Mr. Sobczak, “you’re actually rewarded for that.”

He believes paying users will benefit Tsu as well: “We’re everybody’s kind of de facto payment platform that is giving them purchasing power for their data, their content and their network. That’s very powerful.” Becoming a payment platform would allow the company to go beyond merely selling ads, he added. “I would rather play in the peer-to-peer credit and merchant services markets, because that’s 10 times a larger market than just digital advertising and mobile advertising markets.” He imagines Tsu potentially becoming “the people’s global banker.”

It’s not the first time a social network has paid users. At ReCode, Kurt Wagner notes that “Bubblews, a social network founded in 2012 with a similar mindset, pays users when the content they share generates engagement like comments or Likes.”

But such revenue-sharing is by no means mainstream, and some have taken the major social networks to task for what they say is exploitation of users’ time and energy.

The artist Laurel Ptak writes in her much-discussed piece, “Wages for Facebook”: “They say it’s friendship. We say it’s unwaged work. With every like, chat, tag or poke our subjectivity turns them a profit.” And on her website, she asks:

“In 2012 Facebook reached more than 1 billion users and generated a revenue of 5.1 billion dollars. It is the first social-media website to be traded on the stock exchange wherein all content on its site is created by its users. Is what we do on Facebook work? How would we calculate our value? What could an alternate form of social media, based on an idea of the commons or a feminist praxis, look like?”

Astra Taylor describes a similar concern in her book “The People’s Platform.” “A frustrated minority,” she writes, “have complained that we are living in a world of ‘digital feudalism,’ where sites like Facebook and Tumblr offer up land for content providers to work while platform owners expropriate value with impunity and, if you read the fine print, stake unprecedented claim over users’ creations.” She quotes Marina Gorbis of the Institute for the Future:

“We, the armies of digital peasants, scramble for subsistence in digital manor economies, lucky to receive scraps of ad dollars here and there, but mostly getting by, sometimes happily, on social rewards — fun, social connections, online reputations. But when the commons are sold or traded on Wall Street, the vast disparities between us, the peasants, and them, the lords, become more obvious and more objectionable.”

Can Tsu be the more communal social network critics are looking for? Brooke Duffy, a professor of media and communication who has studied women’s digital-media behavior, has doubts. “I understand the appeal and I certainly understand the buzz of it,” she told Op-Talk. “I think the problem is, if it gets a critical mass — and I think that’s a big if — who’s actually going to be benefitting?”

Her prediction: “I think what we’ll end up seeing is the same kind of social media influencers that are already getting compensated for their work are the ones that are ultimately going to benefit from this.” Those who have already amassed large followings on other social-media platforms, she argued, may have the easiest time earning money on Tsu.

Some may be able to use Tsu to gain lots of followers from scratch: “There’s always the handful who rise to the top,” she said. “But is this going to radically redefine the compensation model of social network content creation? I’m pretty skeptical of it.”

“There’s a great deal of enthusiasm for whatever the next big social network is,” she added, “and there’s always these hopes that we can identify the next big thing. But I think in all of these cases it tends to be a very small number of people that actually benefit from the contributions of the many.” Those who benefit are those who get in early, but “also people who have the time and income to actually work to grow this audience base.”

“Something that gets swept aside,” she said, “is the level of economic and social capital people need to even get started.”

Mr. Sobczak is more optimistic about users’ chances of making significant money on Tsu. “The monetization is for everybody,” he said, “that’s the beauty of it.”

“Talk to some of these kids out there, they have 5,000 Facebook friends,” he said. He estimated that bringing in 100 friends could make a user thousands of dollars annually. And, he said, “It’s not a zero-sum game: the more people that join, the more ad revenue, and the higher the rate.”

He said the user base was growing rapidly — “we’ve been in the several thousands of requests per second.” One recent adopter: Ed O’Bannon.