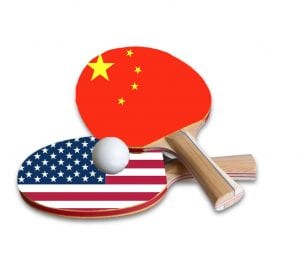 Sports create a common language and a shared culture, if only on the playing field. It can be a useful diplomatic tool to facilitate people-to-people relationships and to build trust between countries. At the global level, sports often become an important avenue for cross-cultural communication, says Tara Sonenshine, a former U.S. under secretary for public diplomacy [JB emphasis] and public affairs, who is now a senior career coach at the Elliott School. The State Department, for instance, dedicates significant resources to sports exchanges among teams in the United States and around the world. Through these sports-focused dialogues, Soneshine explains, the U.S. has a powerful way to disseminate American values internationally.
In many ways, it is a story that reaches back thousands of years— to 776 B.C., when a Greek King offered respite from war by promising safe passage to citizens for “games” to be held amidst conflict. From this ancient truce grew the modern-day Olympic games.
Major global sporting events allow host countries to showcase their nations’ points of pride — and to convey the desired national image. Today, hosting a world-class sports event has become a global stamp of approval, conferring world-class status on the host nation.
Psychologically, a powerful win on the sports field enhances a nation’s sense of self worth. It is partly for this reason that President Vladimir Putin was willing to go to great lengths to ensure that Russia garnered the most gold medals during the 2014 Sochi Winter Games — even to the point of tactics that the International Olympic Committee special commission called the “systemic manipulation of the anti-doping system.”
In recent times, sports diplomacy is conducted on a personal, as well as a governmental level, says Elliott alumna Lindsay Sarah Krasnoff, B.A.’99. A global communications and sports specialist and Executive Committee member of the sports club Sport & Démocratie, which focuses on sports diplomacy, Krasnoff, consults with high-level organizations to leverage sports for diplomatic purposes. Social media has been a game-changer, she says, enabling individual athletes to tell their own stories. She says the nature of sports diplomacy has evolved from a predominantly traditional government to government approach of cultural exchange to include many more informal people to people exchanges — predominantly through social media. Platforms like Twitter, Instagram and YouTube allow individuals to tell the stories as they see them and not simply accept the messaging as it is presented to the public in formal government sponsored exchanges.
With sports diplomacy taking place at all levels, from the global to the individual, there is vast opportunity for major sports events to bring about greater understanding among nations and peoples. Sports have indeed become a force for the good in our conflicted world.
Thanks to Tara Sonenshine, senior career coach at GW’s Elliott School, and Lindsay Sarah Krasnoff, global communications and sports specialist and member of the advisory council to the Elliott School’s Leadership, Ethics, and Practice Initiative, for contributing to this article.
Original Article