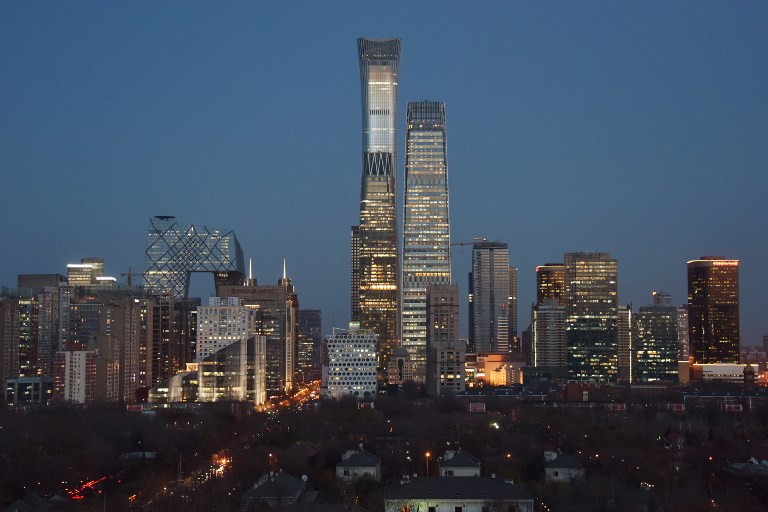 Image from article, with caption: Buildings are seen in the central business district of Beijing. (AFP)
arabnews.com
This week sees China celebrate the 40th anniversary of the start of Deng Xiaoping’s landmark economic reforms. While the changes have been one of the biggest game-changers in global affairs in the post-war era, their very success raises today not just key opportunities but also challenges for Beijing.
On the success side of the ledger, China’s rise to greater prominence has been one of the defining features of recent decades. For instance, data from the International Monetary Fund (IMF) since 2014 asserts that China’s economy is now larger than its US counterpart on the basis of purchasing power parity (which makes adjustments for the fact that goods are cheaper in China and other countries relative to the US).
In so doing, Beijing has recorded an average annual gross domestic product (GDP) growth rate of around 9.5 percent in the past 40 years. The result has been the fostering of a middle-income population of 400 million, and the lifting of more than 700 million Chinese out of poverty.
However, the consequences of this remarkable feat have been more than economic and financial. In terms of perceptions, many worldwide believe that the global political balance of power has swung very significantly.
This is having important, real-world implications, including feeding into the political posturing of some Western politicians on China. Take the example of US President Donald Trump, with his sometimes very blunt anti-Beijing rhetoric and his potential trade war with China.
The stark change in international perceptions toward China is underlined by Pew Global Research. In October 2018, publics in 25 countries overwhelmingly agreed that China plays a more important role in the world today than a decade ago.
Pew also found last year that domestic publics in seven of the 10 EU nations surveyed asserted that China is the world’s “leading economic power.” Moreover, in longtime US ally Australia, the population put China ahead on this question by a two-to-one margin.
Soft power, which rests upon the international attractiveness of a country’s foreign policy, political values and culture, is recognized by Beijing as a key political commodity, but one it has had limited success in cultivating to date.
Thus 58 percent of Australians in 2017 believed that Beijing is the “world’s leading economic power,” a rise of 18 percentage points since 2008. Comparable data for other countries includes the UK, which has seen a rise from 29 to 46 percent over the same period.
While welcomed by many in China who understandably like recognition of the country’s growing might, this opinion shift is causing some headaches for Beijing. As Trump’s often ill-informed rhetoric shows, it has exposed the country to greater foreign scrutiny and fed into perceptions, seized upon by politicians like the US president, tapping into angst about China’s rise.
What this underlines is that China’s growing prominence is not without challenges for Beijing. This is especially so given that the country’s grand strategy had long been premised on a gradual, peaceful transition to power, during which it will grow stronger while keeping a low profile.
Deng himself asserted that consolidating China’s socialism would take dozens of generations, and that the nation should behave humbly during this time, hence one of his trademark comments that it would be best to “hide your edge and nurture your strength.”
Yet Beijing has increasingly adopted a higher profile and a more assertive foreign policy in recent years. The significantly brighter spotlight this has put on the country has unfortunately exposed a soft-power deficit that is complicating its rise.
As international perceptions of China’s power have changed, its global favorability has shown weakness in some key countries and continents, as underlined in Pew’s data. In October 2018, for instance, only three of the 25 countries surveyed asserted that they prefer a world order where China is the leading power rather than the US.
Moreover, in 2017 Pew found that across the populaces surveyed in the EU (10 nations) and Asia-Pacific (seven), there was overall net negative opinions about China. This was 44 percent unfavorable to 43 percent favorable in the EU, versus 41 percent unfavorable and 34 percent favorable in the Asia-Pacific region.
In the US too, China had a net unfavorability rating in 2017, according to Pew. Trump is well aware of this sentiment, and the fact that Republican voters tend to have lower overall favorability than Democrats toward Beijing.
If critical scrutiny intensifies, Beijing must find better ways to tackle this soft-power deficit, including enhanced international public diplomacy [JB emphasis] forgeihearts and minds. At a symbolic level, measures might include utilizing China’s growing capabilities in space travel for high-profile international cooperation projects. Surveys underline that many around the world admire the country’s strength in science and technology.
Beijing should also restart a process of addressing foreign concerns about its intentions as a rising power. Here, it could intensify efforts to be seen as a responsible, peaceful global stakeholder, and match this rhetoric with actions. This agenda may pose significant challenges for Beijing 40 years on from Deng’s reforms, but unless it is tackled, China’s soft-power deficit could only grow bigger in 2019 and beyond.
Andrew Hammond is an associate at LSE IDEAS at the London School of Economics.
Original Article