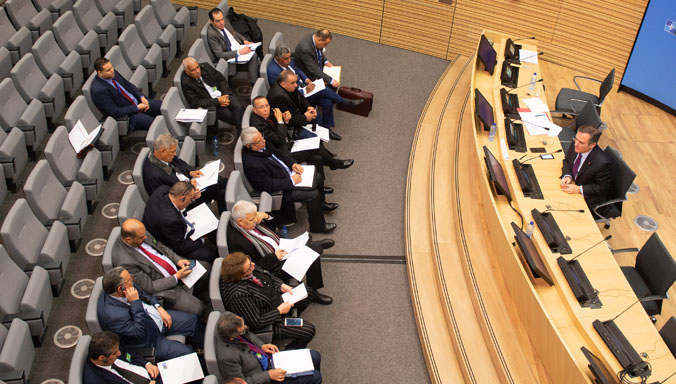 uncaptioned image from entry
On 19-20 February, a group of Algerian parliamentarians from the Council of the Nation and the People’s National Assembly visited NATO Headquarters in the framework of our Mediterranean Dialogue public diplomacy [JB emphasis] activities.
The delegation, composed of members of the Commission for Foreign Affairs and the Commission for National Defence, was briefed on a number of issues, including relations with partners from the Mediterranean Dialogue (MD) and the Istanbul Cooperation Initiative (ICI), current relations between NATO and Russia, the Science for Peace and Security (SPS) programme, energy security, counter-terrorism, and cyber defense.
The parliamentarians also met with the Permanent Representatives from France and from Portugal, as well as the Deputy Permanent Representative from Hungary. The latter became the Contact Point Embassy (CPE) for Algeria in January.
Future opportunities for public diplomacy events were also discussed, including the possibility of hosting a conference in Algeria to celebrate the 25th anniversary of the Mediterranean Dialogue [JB: see].
.Original Article