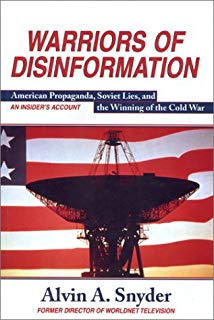 image (not from entry) from
ALVIN A. SNYDER (Age 82)
Of McLean, passed away on January 28, 2019. He was born in Trenton and graduated from the University of Miami. He became executive producer at CBS News, later winning a Grammy Award for his work on Edward R. Murrow [JB — see] "A Reporter Remembers." Later, he was recruited by the Nixon White House to run TV operations after which he became a news executive at WMAQ-Chicago where he garnered 11 Emmy Awards. He returned to Washington as Director of TV & Film at the USIA [JB – see]. As an Annenberg Senior Fellow, his book on the use of propaganda by the U.S. Government, "Warriors of Disinformation," was published in 1996. He later became a Senior Fellow for the USC Center on Public Diplomacy [JB emphasis].
He is survived by his wife of 57 years Anne Glassman Snyder; daughter Carole Heller; son James, and four grandchildren. Funeral service will be held at Temple Rodef Shalom, 2100 Westmoreland St. Falls Church, VA 22043 on Monday, February, 4 at 10 a.m. Interment following at King David Memorial Gardens. Shiva to be observed at the home of Anne Snyder at 7 p.m. Donations may be made to Indiana University School of Medicine, IU Foundation for Genetic Research of Alzheimer's or the University Of Miami School Of Communications.
Published in The Washington Post from Feb. 2 to Feb. 4, 2019
Original Article