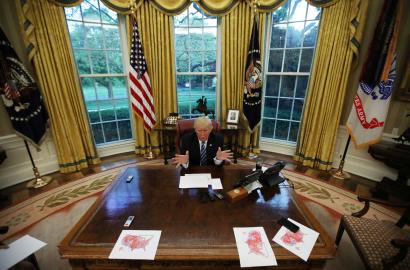 Image from article, with caption: Not usually seen here before 11am.
Excerpt:

Trump …has dispensed with transparency measures put in place by previous presidents, ignored scheduling and organizational precedents, and shed staffers whose job it was to keep track of his movements. Here’s what has changed during his term: …
Last year, the White House stopped releasing “readouts” of the president’s calls with foreign leaders. These “vital tools of public diplomacy [JB emphasis] in a democracy” allow Americans to know what sort of “diplomacy is being conducted on their behalf,” instead of relying on anonymous leaks, or from statements made by leaders in another country, Government Executive explained. …