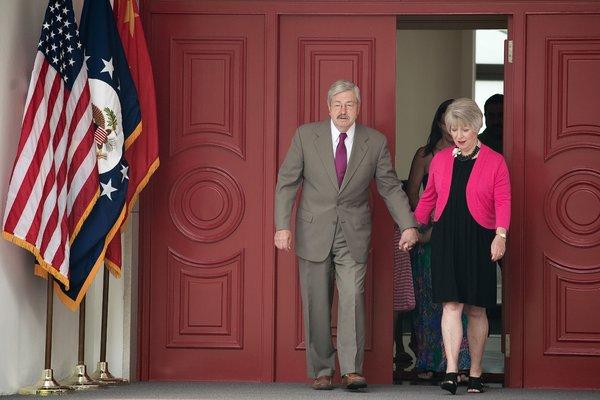 Image from article: The American ambassador to China, Terry Branstad, and his wife, Christine, at their residence in Beijing. A Chinese university turned down his request to visit a center to promote American culture this fall. Nicolas Asfouri
By Jane Perlez and Luz Ding, The New York Times, Dec. 30, 2018; original article contains links
BEIJING — The American ambassador to China, Terry Branstad, wanted to make what in most nations would have been a routine trip.
One of his favorite schools, Iowa State University, had opened a center to promote American culture in an inland Chinese province, and the laid-back former governor of Iowa was eager to take questions from Chinese students.
The center’s program, largely financed by the State Department, was deliberately benign so as not to offend Chinese government sensibilities. Politics was off the agenda. English lessons focused on fashion, music and sports. An essay-writing contest was called “Bald Eagle & Panda” after well-known fauna in both countries.
But Henan Normal University, a campus set on the Yellow River with a prominent statue of Mao Zedong out front, denied Mr. Branstad permission to visit the center this fall — and offered no explanation.
The rebuff underscored how the United States and China compete not only in trade and technology, but also over the values and beliefs that define their societies, an echo of the Cold War with the Soviet Union.
In China, such programs provided a window into American culture outside the filter of the Communist Party, and their unwinding could deepen the divide between the societies of the world’s two largest economies.
The center that turned down Branstad was one of more than 20 that the State Department opened in the past decade on college campuses across China to promote American culture and counter anti-American propaganda by offering English lessons, screening movies and hosting visiting music and dance performances.
Today, the American centers have closed after the Chinese authorities denied American officials entry to them and state security agents interrogated an American academic working on a Chinese campus.
“It became clear after a while that the centers were no longer an asset to the Americans and became a terrible liability,” said Jennifer Tarlin of the University of North Dakota, who served as director of an American center at a Shanghai university from 2011 until this summer.

Image: A Latin music performance in the American Culture Exchange Center in the University of Shanghai for Science and Technology, in 2015.CreditZhang Jiawei
The program’s launch coincided with a rise in nationalist sentiment in China. Shortly after he came into power six years ago, President Xi Jinping rolled out a campaign against Western values, investing Communist Party members in academia with the power to redline even the most innocuous and apolitical expressions of American culture.
And funding American culture in China became particularly unpopular in Washington as the Trump administration worked to distance the countries and anger built over Beijing’s propaganda in America.
China’s Ministry of Foreign Affairs did not respond to a request for comment.
When the American centers opened a decade ago, they bucked a trend. Promoting American culture abroad, once a high point of American foreign policy, was considered obsolete, an idea that was dispensed with at the end of the Cold War.
In the early 1990s, conservative Republicans and Clinton Democrats worked together to demolish the United States Information Agency and slash the budgets of culture programs abroad. Democracy had prevailed, the thinking went, and the internet rendered cultural diplomacy unnecessary.
But China was a special case. The American government was concerned about negative depictions of the United States in China’s tightly controlled state media.
On American campuses, the Chinese government was subsidizing a network of Confucius Institutes, where Beijing appoints teachers and dictates the curriculum. It grew from around 70 outposts during the Obama administration to more than 100 today.
In 2011, only five roughly equivalent American places existed in China — at American embassies or consulates, sites that are closely watched by Chinese security and forbidding for local residents to enter.
The Obama administration felt compelled to act.
By 2012, the State Department had made individual grants of $100,000 to more than two dozen American universities to open centers on Chinese campuses. To distance itself, it urged the centers to seek extra funds from private American sources and stayed away from decisions about programming.
William Brustein, then-vice provost for international affairs at Ohio State University, recalled meeting the American ambassador, Jon M. Huntsman Jr., in Beijing in 2011.
The ambassador told Mr. Brustein about the State Department’s new venture.
“‘They’re like the Confucius Institutes — this is America’s answer,’” Mr. Brustein recounted the ambassador saying. “‘You should open a center — try to pick a place that is not Beijing or Shanghai.’”

Image: The Klezmatics, a New York-based band, performing in 2015 at an American cultural center at the Nanjing University of Posts and Telecommunications.Credit Huang Wei
Ohio State prided itself on its already large number of fee-paying Chinese students, and the university thought the center would attract more. Many students came from Hubei Province, so it was easy for Mr. Brustein to persuade Wuhan University, a major university there, to agree to host a place that would showcase American themes.
The center opened in 2012 in a loft-like space with a kitchen and English-language cookbooks, and was led by an English teacher at Ohio State, Bob Eckhart, who brought jazz groups and dance ensembles over for performances.
The most successful gig was a group of African-American step dancers, Mr. Eckhart said. “We stressed that we were presenting authentic American culture and that we were not just cheerleaders for America.”
Other centers opened at campuses across China.
Often the programming was quirky. At the University of Shanghai for Science and Technology, Ms. Tarlin invited American musicians who played Depression-era folk. She staged a workshop production of the opera “Scarlet Letter” with a libretto by the feminist writer Carol Gilligan.
It wasn’t long before the centers ran afoul of the orthodoxy of President Xi and his campaign against liberal democracy.
Strict edicts announced by the education minister, Yuan Guiren, in early 2015 signaled the official disfavor. Books highlighting Western values had no place in the classroom; Chinese universities must ensure that Mr. Xi’s ideology was front and center, Mr. Yuan said.
Suddenly, university officials barred American cultural groups and speakers. The Chinese honed in on the ties with the State Department, suspicious that the United States was using the centers as a cover for spreading democratic ideas, former and current diplomats said.
In Nanjing, Chinese state security officials summoned a dean of the New York Institute of Technology, Monique Taylor, for questioning for several hours in 2015.
Ms. Taylor was responsible for the American center sponsored by the institute at the Nanjing University of Posts and Telecommunications; she was also in charge of a separate academic program with faculty from New York City on the Nanjing campus.
The interrogation rattled the American university, according to three people familiar with the episode. A spokeswoman for the university declined to comment.

Image: The audience watching The Klezmatics’ performance. Credit Huang Wei
After the episode, the university declined a new State Department grant and deleted the word American from the center’s name. It was renamed Campus Commons.
A State Department inspector general’s appraisal of the embassy in Beijing in 2017 described how the Chinese government called American public affairs diplomats “hostile foreign forces.” The report said that from January 2016 to April 2017, there were 153 instances of Chinese thwarting the work of the American public affairs officials, including with the centers.
In the 2000s, as the Confucius Institutes flourished in the United States, those who wanted to promote American soft power eventually prevailed with the opening of the centers in China. But American diplomats responsible for culture could never get the centers to take off: In Washington, the economic relationship was considered far more important, former diplomats said.
As secretary of state, John Kerry took up the cause of the centers with Liu Yandong, who was a vice premier until this year and China’s top culture czar.
The Chinese dismissed Mr. Kerry’s complaints, said Richard Stengel, who was under secretary of state for public diplomacy [JB emphasis] and public affairs at the time.
“In my experience, the Chinese project, rationalize and then minimize,” Mr. Stengel said, explaining that senior Chinese officials denied any problems. “They first say, ‘You do it, too.’ Then they say: ‘It’s not my responsibility, it happens on the local level.’ And finally: ‘It doesn’t matter much anyway.’”
In all, the State Department spent $5.1 million on 29 centers, though about 10 of them never opened. The inspector general’s report concluded that the effort had been “largely ineffective.”
The State Department said it had stopped funding all of the centers.
Mr. Branstad was not the first American envoy to run into trouble over one of them.
Mr. Kerry complained to the Chinese ambassador to Washington, Cui Tiankai, that the American ambassador at the time, Max Baucus, had also been prevented from traveling to one.
According to Mr. Stengel, who was in the conversation, Mr. Kerry turned to Mr. Cui and asked: “Have we ever limited where you can go?”
Mr. Cui replied: “Not yet.”
Original Article