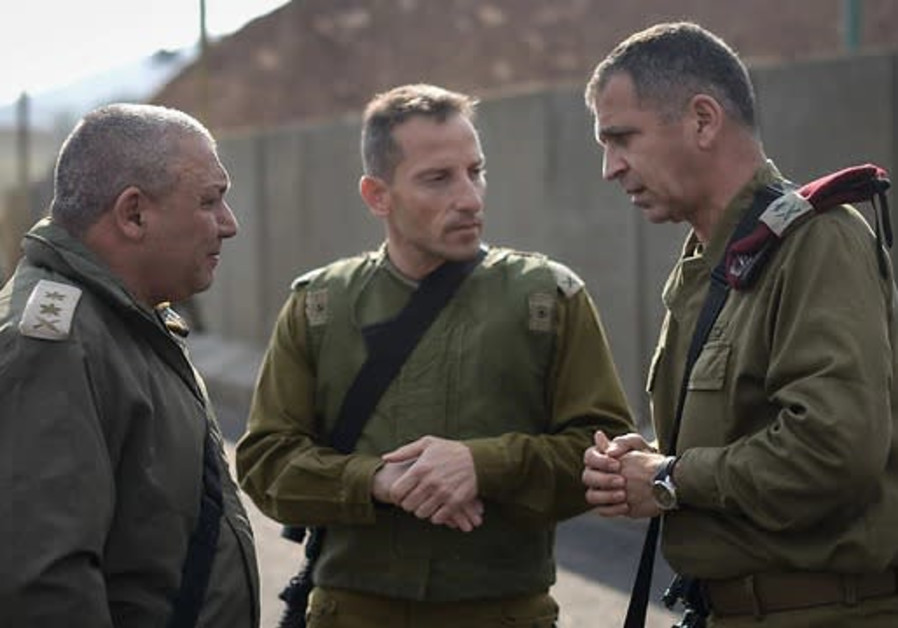 Yaakov Katz, The Jerusalem Post
The Israeli people got a taste of what an effective PR campaign looks like over the past week, in the run up to the ceremony in Tel Aviv on Tuesday.

Image from article Aviv Kochavi (L) and Gadi Eisenkot (R). (photo credit: IDF)
The greatest challenge for any public-relations campaign is shaping the narrative – getting the public to believe the version of events that you are trying to sell.
The Israeli people got a taste of what an effective PR campaign looks like over the past week, in the run up to the ceremony in Tel Aviv on Tuesday, where Lt.-Gen. Gadi Eisenkot will step down as IDF chief of staff and be replaced by Maj.-Gen. Aviv Kochavi.
Kochavi will have a multitude of challenges on his desk when he crosses the 14th floor of the Kirya Military Headquarters and moves into his new office. He would do well to study the way the IDF effectively campaigned the media on behalf of his predecessor and apply those same methodologies to future combat operations.
I’ll explain: The IDF knew for months that Eisenkot’s last official day would be on Tuesday. As a result, it prepared accordingly.
It sent former IDF officers who served alongside Eisenkot to radio and TV stations to talk about the outgoing chief of staff and begin shaping his legacy; Eisenkot met with editors of media organizations as well as military reporters and senior columnists; he gave a significant number of well-choreographed TV and radio interviews; the IDF Spokesman’s Office released flattering photos of the outgoing chief of staff on an almost-daily basis, including some that had never been seen before and were meant to humanize him. They appeared in almost all of the daily Israeli newspapers (including this one) on Sunday.
This is all legitimate, and to be clear, Eisenkot also deserves it. Whether you agree with the positions he took on some of the controversial issues that he faced during his four-year term or not (incendiary balloons from Gaza, Hebron shooter Elor Azaria, Hamas rocket fire, the integration of women into combat units, and more), he dedicated more than 40 years of his life to the IDF in service of the Jewish nation. For that, he deserves our gratitude.
Nevertheless, it is worth wondering what would happen if this same type of campaign would be applied to future operational scenarios. Take the Gaza border riots as an example. They started in March and the IDF knew they were going to happen beforehand. It had the opportunity to prepare accordingly. But it didn’t, and as a result, it lost its narrative.
Imagine it had applied all of the Eisenkot campaign tools before the Gaza riots, or prior to the Turkish flotilla that the Israeli navy stopped eight years ago. The campaign for both of these would have included briefings to the media beforehand, providing exclusive access to foreign journalists about IDF preparations, and sending large numbers of former officers to the radio and TV stations before the riots even began. Basically, preemptive steps should have been taken to help shape the narrative before a single protester stormed the border or an IDF sniper fired a single shot.
In May, as Israel was celebrating the moving of the US Embassy to Jerusalem, over 50 Palestinians were shot and killed along the border with Gaza. Even if this was unavoidable, the government, and particularly the IDF, could have done a better job explaining – beforehand – why the death toll might be so high.
Preemptive public diplomacy [JB emphasis] might not have stopped the criticism, but it could have been mitigated. The IDF, for example, refused to let the foreign press get close to the border fence to see the riots, and instead kept all of the journalists – Israeli and foreign – at a distance of about two kilometers. Had it given them access earlier to see how the IDF was preparing and training to confront the riots, maybe the reports would have been less critical.
The responsibility for all of this does not rest only with the IDF. The Foreign Ministry should be playing a more prominent role in shaping and selling Israel’s narrative to the world.
This past week, we got a taste of what an effective media campaign looks like. It shouldn’t be used though just for when a chief of staff steps down.
Original Article