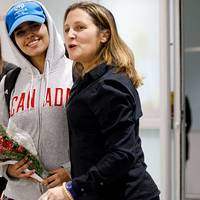 For most Canadians, television footage of 18-year-old Saudi asylum seeker Rahaf Mohammed walking through Toronto’s airport on the arm of Foreign Affairs Minister Chrystia Freeland was a feel-good moment.
For Neil Bruce, chief executive officer of SNC-Lavalin Group Inc., the political photo opportunity was a symbol of what has become a multibillion-dollar headache at the country’s largest engineering firm. Montreal-based SNC now faces the prospect of a sweeping restructuring, partly because of decisions made in Ottawa. One of those decisions was to escalate a diplomatic row with Saudi Arabia, the home of 9,000 SNC employees.
SNC took a $1.24- billion write down Monday on its oil and gas business, which accounts for approximately one-third of the company’s revenue. The hit reflects a deteriorating relationship between the Canadian government and the royal family that runs the kingdom. SNC has been doing business in Saudi Arabia for 50 years; Saudi contracts accounted for 11 per cent of its $9.3-billion in annual sales in fiscal 2017, and the country has been an area of growth. But that’s over.
The Saudi relationship took a beating last August, when Ms. Freeland tweeted her support for jailed dissidents. The Saudi regime hit back, suspending new trade and investment ties with Canada. Things have been frosty ever since. While Mr. Bruce tried to be diplomatic in his comments on Monday, he made it clear that SNC’s prospects in the region grew bleaker this month when the Foreign Affairs Minister personally welcomed Ms. Mohammed, who has renounced Islam and denounced her country’s oppressive treatment of women. …