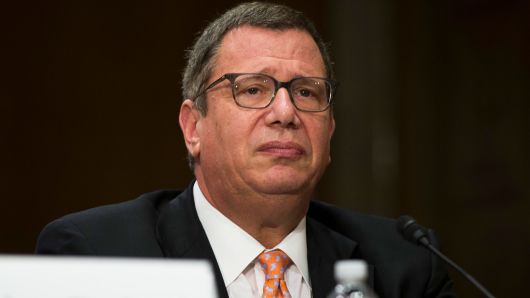 Image from, with caption: Alex Edelman | picture-alliance | dpa | APIrwin Steven Goldstein, of New York, during his confirmation hearing to be Under Secretary for Public Diplomacy [JB emphasis] at the United States Department of State, before the United States Senate Foreign Relations Committee on Capitol Hill in Washington, D.C. on November 1st, 2017.
Excerpt:

“Rex Tillerson and Jim Mattis are two of the finest people ever to serve in government,” said Steve Goldstein, who was under secretary of state [JB – for Public Diplomacy and Public Affairs] and he was fired along with Mr. Tillerson. “They were very close and worked hard at trying to do what was best for the country, and sometimes that meant being brutally honest with folks at the White House.” …