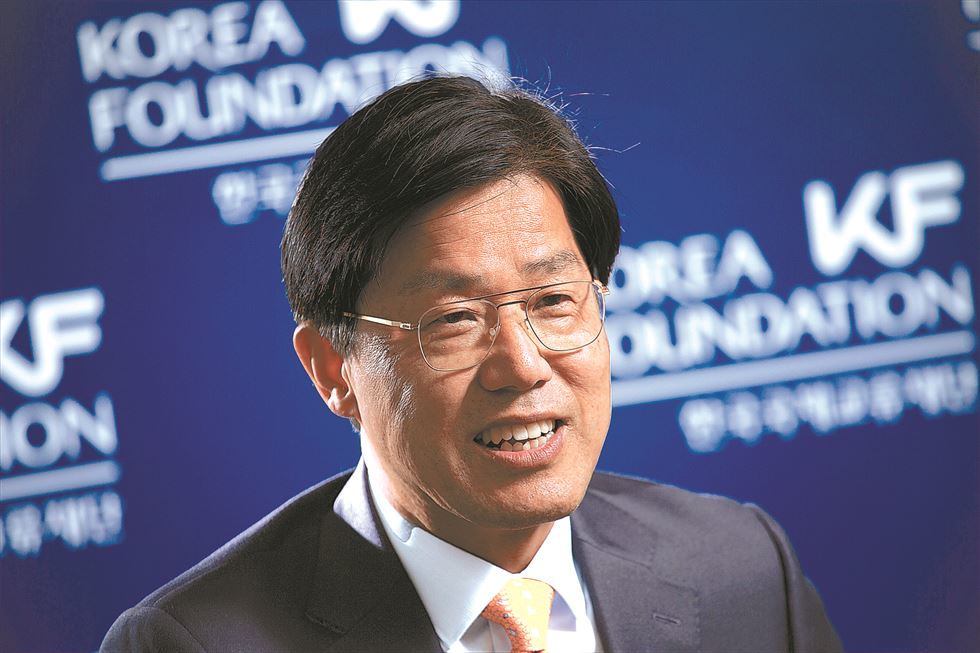 KF helps raise public awareness toward government's diplomatic policies
By Yi Whan-woo
The latest hazing death of a biracial teenager in Incheon and anti-immigration protests against asylum seekers from Yemen show the challenges Korea faces as it becomes a multicultural society.
To tackle such challenges, the Korea Foundation (KF), a nonprofit organization that has been promoting public diplomacy [JB emphasis] under the Ministry of Foreign Affairs, is stepping up efforts to help people develop a global mindset, according to KF President Lee Si-hyung.
He deemed two projects — a memorandum of understanding (MOU) with district offices in Busan and the first "Public Diplomacy Week" — were especially helpful to achieve the goal.
The MOU was signed by ASEAN Culture House, an institution in Busan aimed at nurturing cultures of 10 ASEAN countries, and each district office in Busan to enhance cooperation for supporting multicultural families, many from Southeast Asia.
The first Public Diplomacy Week from Nov. 1 to 3 at Dongdaemun Design Plaza in Seoul was to assess Korea's public diplomacy and how it can be developed to help Koreans and foreigners understand each other better.
"Protests against the asylum seekers from Yemen are only beginning of the problems already faced by the European countries," Lee told The Korea Times. "And having a global mindset should be the starting point to tackle the issues."
He suggested a two-step approach — raising public awareness toward diversity in the short term and getting ready to accept refugees in the long term.
"In that regard, the ASEAN Culture House's project is right on target for our goal in the short term," he said. "And although not intended, Public Diplomacy Week is believed to help Koreans understand the people from outside."
Established in 1991, the KF aims to promote understanding of Korea and strengthen partnerships with institutions and opinion leaders around the world.
It has been responsible for public diplomacy-related projects in accordance with a public diplomacy act enacted in August 2017.
The first Public Diplomacy Week featured presentations by embassies in Seoul on their respective public diplomacy programs, a conference on the role of social media in public diplomacy and an introduction to jobs in the public diplomacy sector.
The KF plans to host Public Diplomacy Week every year.
ASEAN Culture House opened in September 2017, in line with the government's plan to relocate government bodies and public organizations outside Seoul for balanced societal development.
The KF moved its headquarters to Seogwipo, Jeju Island, in July, while leaving its global affairs bureau in Seoul.
It enables the foundation to operate in three cities in Korea, along with seven offices abroad.
"I believe our presence in Busan and Jeju Island can help their campaign to go global," Lee said, referring to Jeju's campaign for international investment and conferences.
He pointed out that Busan and outer South Gyeongsang Province were home for many multicultural families.
The foundation's overseas projects include Korea Chair and Korea Center to enhance collaboration with scholars, researchers, politicians and journalists on security policies.
Korea Chairs have been established at the Center for Strategic and International Studies, led by scholar and policy wonk Victor Cha; the Brookings Institution, led by academic Jung Pak; and Free University of Brussels, headed by Ramon Pacheco Pardo. A Korea Chair at Rand Corp. is being expanded. All the institutions except the Free University of Brussels (Belgium) are in the United States.
Korea Centers have been set up at the Woodrow Wilson Center (U.S.) and the Institute for Security and Development Policy (Sweden).
Original Article