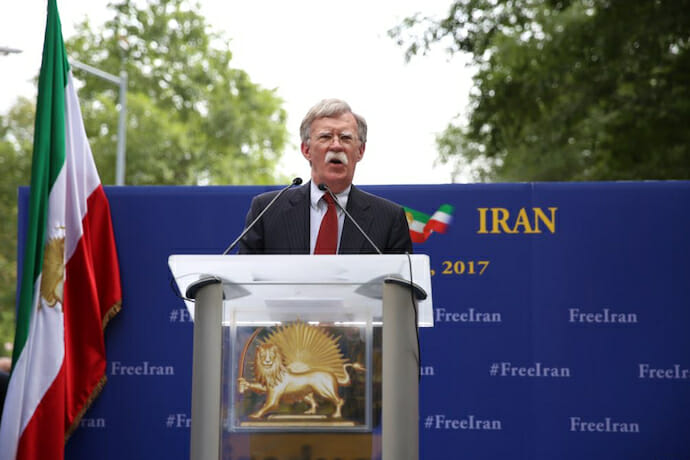 White House National Security Adviser, John Bolton, is back in the saddle after news reports broke the stories that he asked Pentagon officials to develop possible military strikes against Iran following a mortar attack by an Iranian-backed group on a massive diplomatic compound that houses the U.S. embassy in Baghdad in September 2018. Bolton is an Iran hawk who has promoted striking Iran over the years. His ultimate goal is regime change in Iran. He promotes the view that attacking Iran will benefit the U.S. non-proliferation goals, re-install a pro-American regime in Iran, as well as ensure its regional allies about America’s security commitment in the region. …
Bolton seems obsessed with changing Iran’s current political landscape and yet contradicts himself by claiming that Washington is not seeking regime change in Iran. Bolton’s request to strike Iran militarily is not new nor surprising. In 2009, Bolton wrote an op-ed “Time for an Israeli Strike?” for The Washington Post clarifying his views on Iran. “Those who oppose Iran acquiring nuclear weapons are left in the near term with only the option of targeted military force against its weapons facilities. Significantly, the uprising in Iran also makes it more likely that an effective public diplomacy [JB emphasis] campaign could be waged in the country to explain to Iranians that such an attack is directed against the regime, not against the Iranian people. This was always true, but it has become even more important to make this case emphatically when the gulf between the Islamic revolution of 1979 and the citizens of Iran has never been clearer or wider. Military action against Iran’s nuclear program and the ultimate goal of regime change can be worked together consistently.” …