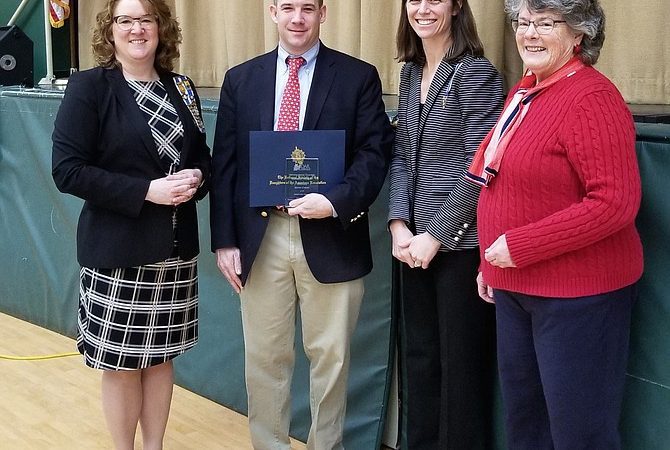 During a school assembly at Saint Luke School on Feb. 19, 2019, members of the McLean-based Freedom Hill Chapter of the Daughters of the American Revolution (DAR) presented Kevin Cyron with an Outstanding Teacher of American History Award. Mr. Cyron was elected the winner of this award based on his exceptional work and achievement as a teacher. The chapter also endorsed Mr. Cyron in the State contest of the Virginia DAR. …
Mr. Cyron is a social studies teacher at Saint Luke School in McLean since 2011 and also serves as the middle school coordinator between the academic team, administration and parents. Mr. Cyron is a skillful and knowledgeable teacher who challenges his students to think critically about the world and the relevance of historical perspective. He has a wealth of knowledge about American history and shares his enthusiasm on a daily basis with his students. He graduated from Gonzaga College High School and earned both a Bachelor of Arts in Communication and a Master of Arts, Secondary Education – Social Studies from Marymount University in Arlington. He also holds a Master of Arts in European Studies and Sociology, as well as a Master of Arts in Statecraft and National Security, National Security Defense, Public Diplomacy [JB emphasis], and Political Warfare Concentration. …