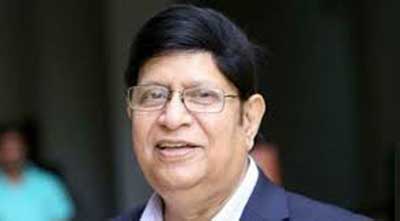 Image from article: Foreign Affairs Minister Dr. A.K. Abdul Momen
DHAKA: Foreign Affairs Minister Dr. A.K. Abdul Momen directed Bangladeshi ambassadors appointed abroad to give an outline of trade and investment the respective countries could make in the next three years.
Prioritizing economic diplomacy on the agenda, the minister sent a letter to all consulate chiefs working abroad, according to a release issued by Ministry of Foreign Affairs on Friday (March 1).
Bangladeshi expatriates are also encouraged to contribute to country’s economy as the country emphasizes on implementation of public diplomacy [JB emphasis], the release said.
Dr. A.K. Abdul Momen urged them for positive branding of Bangladesh in the way of focusing on country’s custom, culture, and heritage in various languages alongside Bangla and English.
Dr. A.K. Abdul Momen said active initiatives taken by the embassies are needed to implant electoral manifesto of current government though larger investment and acquisition of advanced technology.
To do this, continued sincere efforts are to be made to maintain good relations with global community, Dr. A.K. Abdul Momen also said.
Foreign investment could play a vital role to create adequate employment and uplift tourism sector. Having mentioned that, Dr. A.K. Abdul Momen instructed them to seek new markets for garment industries and pharmaceuticals to diversify export.
Original Article

The book named as “Turkey’s Soft Power and Public Diplomacy in Bosnia-Herzegovina and Sandzak (2002-2017)” was published by Union of Turkish World Municipalities (TDBB). Emerging as a regional power, Turkey’s soft power and public diplomacy has attracted the attention of researchers in recent years. Within this framework, the book mentioned is based on the doctoral thesis submitted at Boğaziçi University in 2020. Written by Jahja Muhasilovic, the book consists of 341 pages. In the book, the ‘religious diplomacy’ carried out by Presidency of Religious Affairs of Turkey, ‘student diplomacy’ conducted by Presidency for Turks Abroad and Related Communities (YTB) and… [...]

Even as borders closed around the world last year due to the pandemic, that didn’t stop the spread of the Korean Wave, or “hallyu,” from reaching new heights. There were a total of 100 million members in 1,835 Korean Wave-related clubs across the world as of September 2020, marking a 5.45 million increase from the year before, according to the latest report from the Korea Foundation, a public diplomacy arm of Seoul’s Foreign Ministry. The annual report, an account on the global status of hallyu, analyzes trends related to the global ascent of Korean cultural content across 109 countries and… [...]