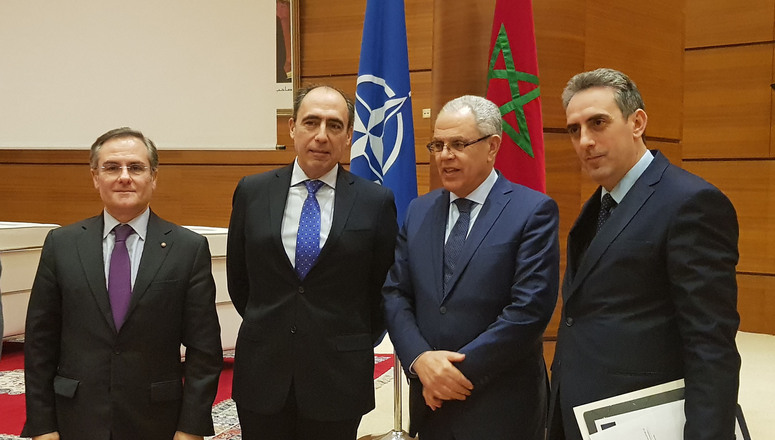 
On 22 January 2019, NATO and Morocco organized a joint public diplomacy [JB emphasis] event in Rabat, Morocco to celebrate the 25th anniversary of the Mediterranean Dialogue and NATO-Morocco cooperation.

The opening ceremony was attended by the Minister of Foreign Affairs and International Cooperation of Morocco, Mr Nasser Bourita, the NATO Assistant Secretary General for Political Affairs and Security Policy, Ambassador Alejandro Alvargonzález, and the Minister Delegate in Charge of the Administration of Defence, Mr Abdellatif Loudiyi.
In their opening statements, both Minister Bourita and Ambassador Alvargonzález underlined the achievements of NATO-Morocco cooperation and emphasized the added value of the Mediterranean Dialogue in addressing the common security challenges faced by Morocco and NATO.
The first session of the seminar revolved around NATO-Morocco cooperation. The first speaker, NATO’s Head of Middle East and North Africa Section, Mr Nicola de Santis, provided an overview of the achievements of the Mediterranean Dialogue and NATO-Morocco cooperation, through the active contribution offered to the Kingdom for the modernization of its security and defense institutions.
Other speakers from NATO were Navy Captain Mathea Giacometti, Staff Officer South in the International Military Staff who spoke on NATO-Morocco military cooperation and Dr Eyup Turmus, Adviser in the Science for Peace and Security Programme, who elaborated on the current and upcoming cooperative projects with Morocco, in the fields of SPS.
The seminar was attended by a mix of civil society representatives, academics, officials from Morocco, from Mediterranean Dialogue and NATO countries, and media representatives.
During his visit, Assistant Secretary General Alvargonzález held bilateral talks with the Minister of Foreign Affairs and International Cooperation of Morocco, Mr Nasser Bourita, the Minister Delegate in Charge of the Administation of Defence Mr Abdellatif Loudiyi and Mr Youssine Mansouri, Director General of the General Directorate for Studies and Documentation. The Assistant Secretary General also met Allied Ambassadors and officials in the Residence of the Belgian Ambassador to Morocco. Belgium serves also as NATO Contact Point Embassy in Morocco.
Original Article