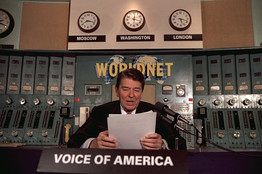 Anastasia Edel, The New York Times, Jan. 19, 2019; original article contains links
The American president has changed my relationship with both my old country and my new one.

American attitudes toward Russia and Russians have always been hostage to the larger relationship between our nations. During the Reagan years, Russia was the “evil empire,” purveyor of nuclear arms, spies and Hollywood villains. The Russians repaid in kind: At a New Year’s show in the Kremlin Palace that I attended at the tender age of 9, the antagonist was an agent of the “rotting West” sent to steal Soviet children’s gifts.
But there were always counterpoints. Which American intellectual didn’t lose him or herself in “The Brothers Karamazov”? Which Soviet dissident didn’t hope to be shouldered by the American government, the guarantor of human rights, dignity and freedom of conscience? As we listened to the Voice of America on crackling radio transmitters in our tiny Soviet kitchen, devouring the facts that our government concealed — about the war in Afghanistan, the dissidents thrown into mental asylums, the Chernobyl disaster — we couldn’t help but admire America as a moral counterweight. Of all my beliefs assailed by the realities of Donald Trump’s America, this one is the hardest to let go. …
Washington funded the Voice of America that my family relied on to hear the truth, but today the White House spews falsities, in which the Soviet invasion of Afghanistan becomes a counterterrorist operation. An invitation was extended to a Russian ultranationalist and anti-American bigot, Dmitry Rogozin, to visit an American government agency in the interest of “mutual cooperation.” This week, Oleg Deripaska, an oligarch and another influential Putin insider who once faced credible accusations of extortion, bribery and even murder, secured easing of the sanctions for his companies. And now there is a report — parts of which the special counsel’s office disputes — that the man in the White House may have instructed his lawyer Michael Cohen to lie to Congress about the extent of his business dealings with Russia, which included a prospective penthouse for Mr. Putin, delivered by an American presidential candidate. …
Anastasia Edel (@aedelwriter) grew up in southern Russia and is the author of “Russia: Putin’s Playground: Empire, Revolution, and the New Tsar.”