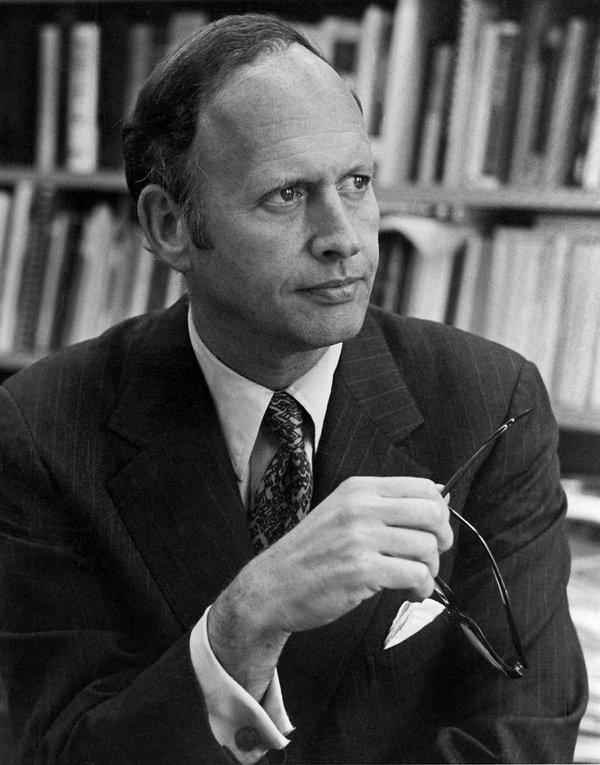 Image from article, with caption: Richard Gardner in 1977, the year he was appointed ambassador to Italy. He toggled between diplomatic assignments and a career as a Columbia University law professor.
Richard Gardner, who in the late 1970s served as the American ambassador to Italy in a period of political violence there and concern in Washington about the Italian Communist Party’s growing strength, died on Feb. 16 at his home in Manhattan. He was 91.
His daughter, Nina Gardner, said the cause was congestive heart failure.
While his profile was probably highest when he was posted to Rome, Dr. Gardner was also an adviser to Democratic presidential candidates and a distinguished law professor at Columbia University.
One candidate he advised was Jimmy Carter, who on becoming president in 1977 appointed Dr. Gardner to the Rome post.
Until then, American officials had long supported Italy’s Christian Democrats, who dominated politics there, and kept the door closed to leftist parties. It was the height of the Cold War, and Washington was worried about Communist influence in Western Europe, especially in France and Italy.
The administration had loosened its position on Eurocommunism when it sent Dr. Gardner to Italy, but gave him instructions not to be the first one to articulate this new policy.

Image from article: Federal judge A. Leon Higginbotham swearing in Dr. Gardner as the ambassador to Italy in 1977 as President Jimmy Carter and Dr. Gardner’s wife, Danielle Luzzatto, looked on. Dr. Gardner had been a foreign policy campaign adviser to Mr. Carter.
When reporters asked him on his arrival what his policy on the Italian Communist Party was going to be, Dr. Gardner responded with something more creative than a “no comment.”
As he recalled in his 2005 memoir, “Mission Italy: On the Front Lines of the Cold War,” he answered, diplomatically, with an old Venetian proverb, “Prima de parlar, tasi” — “Before you speak, be quiet.”
At the time, the Communist Party had become the second-largest political force in Italy, a member of NATO, and was close to entering the government. One mission of the American Embassy in Rome was to gain a deeper understanding of Italy’s Communists and their intentions.
These were the so-called Years of Lead in Italy, when extremists on the left, mainly the Red Brigades, terrorized the country with bombings and killings of politicians, businessmen and other public figures, while right-wing extremists murdered citizens in attacks on banks, train stations and public gatherings.
In 1978, amid intense political maneuvering in Italy to allow the Communists and other opposition parties to enter the government, Dr. Gardner was called back to Washington for consultations.
The Carter administration then issued a statement stressing opposition to Communist participation in Western European governments.

Image from article: Dr. Gardner with President Giovanni Leone of Italy at the presidential palace in 1977. Ambassador Gardner served during the so-called Years of Lead, when extremists on both the left and right terrorized the country.
Yet in tandem with such calls, the Carter administration softened visa restrictions for Italy’s Communists Party officials, including Giorgio Napolitano, who was later president of Italy. In 1977, the Italian government allowed the party’s newspaper, L’Unità, to open a bureau in New York.
And it invited prominent Italian leftists, including the filmmaker Federico Fellini, the writer Alberto Moravia and the painter Renato Guttuso, to embassy functions.
In 1979, in a diplomatic accomplishment that many credited to Dr. Gardner, the United States secured Italy’s agreement to accept placing new American missiles there as part of NATO’s program to modernize nuclear forces.
Italy was the first European country to do so, despite having the largest Communist party in the West, and Germany followed. The leader of the Italian Socialist Party, with whom Dr. Gardner was on good terms, also supported the decision, despite the party’s having once rejected NATO.
After leaving Rome in 1981, Dr. Gardner advised Al Gore on foreign policy during his 1988 presidential campaign and Bill Clinton in his campaign in 1992. Under President Clinton, Dr. Gardner was ambassador to Spain from 1993 to 1997.
Richard Newton Gardner was born in Manhattan on July 9, 1927, to Samuel and Ethel (Alias) Gardner. His father was a lawyer, his mother a homemaker.

Image from article: Dr. Gardner, right, at a private party in New York in 1997 with the writer and human-rights activist Elie Wiesel, left, and Kofi Annan, the United Nations secretary general.
After military service with the Army News Service in New Jersey, he studied international economics at Harvard College and received a law degree from Yale in 1951. A Rhodes scholar, he earned a Ph.D. in economics from Oxford University in 1954. His doctoral thesis became a book, “Sterling-Dollar Diplomacy: The Origins and the Prospects of Our International Economic Order” (1969).
In 1956 he married Danielle Luzzatto, who had been born into a Jewish family in Venice and had fled Italy — to Switzerland, France and later the United States — under Benito Mussolini’s racial laws of 1938. She died in 2008.
In addition to his daughter, a lecturer in international law at Johns Hopkins University and director of a consulting firm, he is survived by his son, Anthony, who was the United States ambassador to the European Union during the Obama administration; and three grandchildren.
Dr. Gardner began teaching international law at Columbia University in 1954. In the early 1960s he was deputy assistant secretary of state for international organization affairs under President John F. Kennedy. He returned to academia between his diplomatic postings.
At Columbia, he taught a popular seminar, “Legal Aspects of U.S. Foreign Economic Policy.” On the first day of the seminar, his students were asked to jot down their mid- and long-term career aspirations, notes that Dr. Gardner kept and later used when politicians or government officials sought his advice on a new hire. The seminar lasted from 1955 to 2012, when Dr. Gardner retired.
Dr. Gardner was a strong believer in the study of foreign cultures and languages, which he called “public diplomacy. [JB emphasis]”
“We are denying our foreign policy one of our greatest sources of strength as a nation — our system of higher education and our rich pluralistic culture,” he wrote in a New York Times commentary in 1983. “We have also shamefully neglected the education of our young people in foreign languages and foreign area studies. All this seems to me the height of folly.”
Original Article