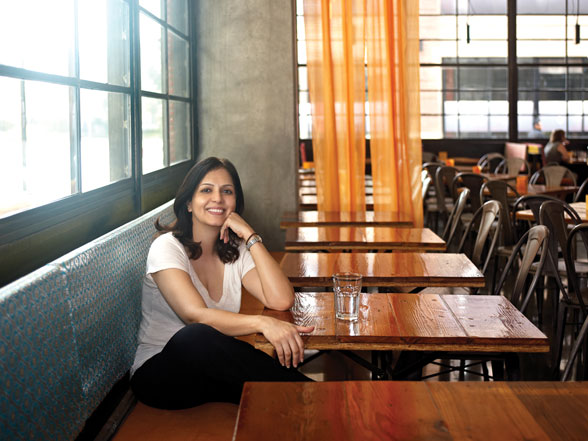 Public Diplomacy Magazine editors Jocelyn Coffin, Emily Schatzle, and Colin Hale sat down with Anita Jaisinghani, chef and owner of Indika and Pondicheri in Houston, Texas, to discuss the growing influence of Indian food in the United States. Since its opening, Pondicheri has earned two James Beard Award nominations for Best Chef of the Southwest 2011 and Best New Restaurant 2011. Based on her experiences growing up in Gujarat, India and emigrating to the United States in 1990, Jaisinghani talked to PDM about her views on Indian cuisine in the United States and the incredible potential for a formal Indian gastrodiplomacy program.

Public Diplomacy Magazine: You run two successful Indian restaurants in Houston, Texas and you have two James Beard Award nominations. Can you tell us a little about your career and the inspiration behind it?

Anita Jaisinghani: I was always into cooking, but I never thought I’d get into a business like this. And the main reason I did was because I couldn’t find the food I was looking for. I was appalled by the quality of Indian food in America.

PDM: If we define gastrodiplomacy as a means of communicating culture and national identity, do you believe that Indian food and your work in particular qualifies as gastrodiplomacy? If so, how?

AJ: My hunch is that people see India as a very third world country with a lot of poverty. They don’t think of Indian cuisine as an elegant cuisine like French food or Norwegian food, which is really hot right now. They think Indian food is cheap and should be readily available and not be high quality or high art. I feel like my food at Indika is very authentic, not traditional. I don’t want it to be traditional because in India, the way we eat is different than how we eat in America. I want to bring it to Americans in a way they would recognize… I do think that the perception of Indian food is rising. I don’t think it’s rising as fast as Korean, Japanese, or even Vietnamese are. Indians are just not as vigilant at showing where we come from. We all love our food but it’s not a documented cuisine. There are no rules to follow. It is a very personal, family inspired cuisine so when you say how do you like daal, it means curried lentils, and there are a thousand different ways to make it, and a hundred different lentils to make it with.

I feel like food is certainly a point where people can come together and sit to enjoy a meal without fighting about their cultural differences. I am a big believer in putting out what I think is cross-cultural. I was born a Hindu and it’s okay to eat beef. In America that’s what we eat and we are living here.

AJ: I am in the interest of getting Indian food to be more recognizable. I don’t care if they take samosa and naan as being the epitome. Look at what David Chang does in New York with his Korean food. It’s not Korean food, it’s totally fusion. But at least people are recognizing the fundamental basis of Korean food. I think fusion food is great as long as you have food that ends up tasting good. As long as people are eating Indian food, I am happy. I don’t care how they’re eating it, as long as they are eating it.

PDM: You focus on using fresh, locally-sourced ingredients that you can find in Houston, where your restaurant is located. Do you think that using ingredients local to Texas undermines the authenticity of your Indian food?

AJ: Not at all. I found just about every ingredient and spice that I needed [in Houston] and I didn’t need to use local ingredients. I chose to. I could’ve stuck to only what I would eat in India, but to me that’s like living in Texas and not breathing the air. How could I live in Houston and not use the great seafood I was getting at my door and use something that’s only in India? That’s why I wanted to use local ingredients. To me there was no other way to cook.

PDM: You said it has been easy to find Indian ingredients in Houston, where there is a large Indian community and there are many Indian grocery stores. Do you think that says something significant about U.S.-Indian relations?

AJ: I hope it does. Now you can get Indian food at Trader Joe’s. A couple of my customers tell me that the best frozen Indian food is from Trader Joe’s. Indian food is very addictive. I think people come to our restaurant on a daily and weekly basis because they just love that flavor. People are into health and eating vegetarian, and South Indian cuisine provides them with a healthy option. Indian food is really good for you and it has so much more flavor than eating just potatoes or any other vegetable.

PDM: Immigrants to the U.S. bring their own cuisines and flavors, but sometimes the food gets homogenized and the nuances get diluted. For example, many Chinese restaurants in Los Angeles serve the same dishes, such as orange chicken, lo mein, etc. What are your thoughts on this?

AJ: That happens with any culture. I think Indian food will come and is coming into its own. I certainly hope that in my lifetime I see it becoming as mainstream as Japanese or Chinese cuisine. The problem with Chinese again is also that it is very diluted. I think this has to do with self-preservation for a lot of immigrants. They’d rather do something that’s safe, tested, and tried.

PDM: India does not have an official gastrodiplomacy program. Do you think they should? If so, what do you think that program might look like?

AJ: I think it would be a great idea for India to launch an official gastrodiplomacy program. I think it’s about bringing Indian food to the street level in the U.S. It’s not about a highfalutin cuisine. It’s about taking something basic and putting it out there. I don’t know what the other countries do to actually bring it down to an everyday, every persons’ level, because really you want to hit everybody – not just the foodies – because the food has universal appeal.

This entry was posted
on Sunday, March 2nd, 2014 at 2:57 am and is filed under Current Issue, Featured, Interview, Issue: Winter 2014.
You can follow any responses to this entry through the RSS 2.0 feed.

You can leave a response, or trackback from your own site.