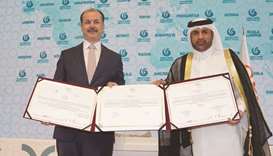 Image from article, with caption: Qatar receives GPDNet presidency
Qatar officially received the Presidency of the Global Public Diplomacy [JB emphasis] Network (GPDNet) at a special ceremony in Istanbul yesterday.
President of the GPDNet General Assembly Professor Seref Ates and official delegations of the member countries attended the ceremony at Asma Sultan hotel in Istanbul.
Qatar became the first Arab country to head the GPDNet since it was established back in 2014.
The general manager of the Cultural Village Foundation (Katara), Dr Khalid bin Ibrahim al-Sulaiti, headed Qatar’s delegation to the ceremony and delivered a speech during the event in which he described Qatar’s pride and honour to receive the GPDNet presidency.
The event coincides with the 10th anniversary of the establishment of the Turkish Yunus Emre Institute.
“Qatar’s receipt of the Presidency of the GPDNet is another success of the continuing successes achieved by the State in its international relations and in various fields,” he said.
Al-Sulaiti assured that Katara will provide all the necessary capacities and strategies to add tangible contributions to the network and achieve new goals.
He then named Darwish Ahmed al-Shebani, who is Katara’s Director of Cultural Affairs, as the new general secretary of the GDPNet, wishing him success in his new mission.
For his part, Darwish said that Katara will focus on enhancing dialogue between the member countries and develop new horizons of co-operation which will have a positive impact on the nations. (QNA)
Original Article