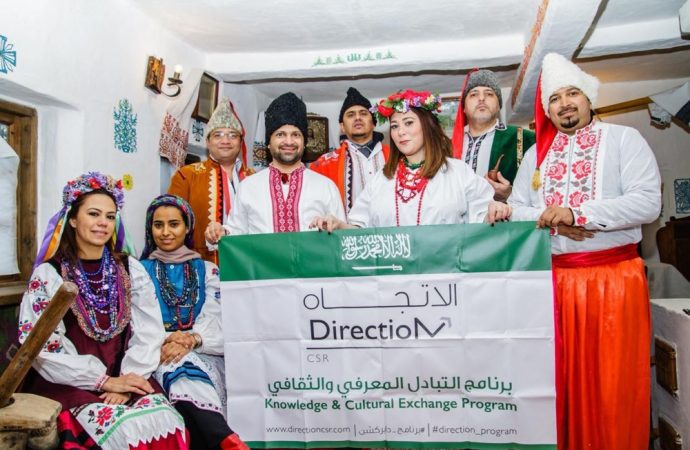 uncaptioned image from article
One of the most important programs by the private sector is the Public Diplomacy [JB emphasis] or “Soft Power”. Saudi Arabia formalized activating the role of media abroad to present the true image of the Kingdom and resist the negative campaigns, instructing the Chambers of Commerce to assign businessmen to play effective roles to the benefit of the Kingdom through meetings or via their wide network and commercial activities in other countries.”
The Chairman of Special Direction CSR [JB – see] Dr. Shadi Khawandanah said: “The soft power has become one of the main means of communication, in addition to being a great boost to the traditional diplomacy as it supports the status and image of societies.”
Accordingly, the Direction Knowledge & Cultural Exchange Program presented a pioneer model where both genders visit different countries to discuss common subjects, and to gain knowledge about other cultures, with emphasis on the Saudi society culture through several meetings and dialogues.
Khawandanah noted that more than 400 men and women have participated in the program, and visited many countries in the past two years. They have been to Japan to discuss “Quality”, to Switzerland to discuss “Crisis Management”, to Italy to discuss “Entrepreneurship” along with volunteering in the Natural Reserves in South Africa, and the German experience for Strategic Planning and Sustainable Development in the United Nations, in addition to other diverse programs.
He added that the program has started the international visits by visiting Ukraine and created a unique cultural exchange experience between Saudi and Ukrainian youth.
The second visit will be to Lebanon to participate in the “Interfaith Dialogue” with direct coordination with Saudi Ambassador Waleed Bukhari in order to visit different religious aimed at constructive interaction.
The Direction Knowledge & Cultural Exchange Program was honored by the Custodian of the Two Holy Mosques King Salman Bin Abdul Aziz and received King Khalid Competitive Competitiveness Award for three consecutive years. — SG
Original Article