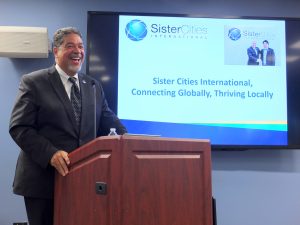 “One Individual, One Community at a Time”

Roger-Mark De Souza narrates the success stories of citizen diplomacy at the First Monday Forum on Feb. 11.Imagine an American non-profit, non-partisan organization that reaches out to improve lives in cities, towns and villages around the globe. President Dwight Eisenhower first had that dream in 1956. It has now enhanced mutual respect and understanding through worldwide exchanges for more than seven decades.Roger-Mark De Souza, the new president of Sister Cities International, electrified an audience of public diplomacy [JB emphasis] professionals and scholars at George Washington University on a rainy Monday in one of the most heartfelt, moving and enthusiastic presentations of the season.“It’s amazing,” a Sister Cities volunteer in Montgomery County in Maryland told Mr. De Souza after returning a few months ago from a trip to a sub-Sahara African village. “They have so little and do so much. We have so much, and do so little.”“You see,” exclaimed the Sister Cities executive, “by consulting and sharing ideas with citizens of other countries through interactive learning, we help shape U. S. foreign relations unofficially, “one handshake at a time.” The range of interactions, he added, includes city officials, local business leaders, NGOs, religious institutions.

How does it work?

Second Lady Karen Pence is the Honorary Vice Chairwoman for Sister Cities International. “Having Mrs. Pence as honorary leadership conveys a certain level of understanding and importance by the current administration,” according to Mr. De Souza.“We develop shared goals,” Mr. De Souza explains. The main goals are to counter disinformation and radicalization, to strengthen civil society, to create a labyrinth that strengthens the rule of law. “In Cameroon,” he adds, “we distributed hygiene kits to young girls, and raised awareness of an entire community about the need for a clean water supply.”How does the Sister Cities organization build such ties? The state of California has the most active, largest number of participating cities and towns and makes up almost a third of the program. China, Japan and Mexico are the most active partner countries. It all begins when a city town or village in the U.S. and a counterpart abroad agree on, and conclude a formal agreement to exchange citizen visits.

A Stellar Example of Citizen Diplomacy at Work

Public Diplomacy Council board member Dr. Sherry Mueller discusses citizen diplomacy with De Souza.Two years ago, according to the Sister Cities annual report, the organization convened its annual Youth Leadership Summit for secondary school students across the United States. The theme of the Virginia Beach conference: “Oceans and Food Safety.” The students heard from nationally-known experts on the value of citizen diplomacy. They also toured the Brock Environmental Center, said to be one of the “greenist” buildings in the U.S. They also visited the Virginia Aquarium and Marine Science Center to learn about the importance of Marine ecosystems to both the environment and food chains.Among the guest speakers at the youth leadership summit was Public Diplomacy Council board member Sherry Mueller, an author and American University professor who specializes in citizen-led educational and cultural exchanges that enhance international understanding around the globe. It was no surprise, then, to many of Sherry’s friends and colleagues that she was in the audience on Feb. 11 for Sister Cities president featured speaker Roger-Mark De Souza.As Dr. Mueller said later: “He underscored the need for grassroots involvement in citizen diplomacy, and the vital importance of such people-to-people contacts of all ages so important to the success of our public diplomacy. He inspired us all, with his infectious enthusiasm for Sister Cities International and its daily endeavors involving more than 140 countries and 2,000 communities around the world.”

Alan HeilAs a 36-year veteran of the Voice of America (VOA), Alan Heil traveled to more than 40 countries as a foreign correspondent in the Middle East, and later as director of News and Current Affairs, deputy director of programs, and deputy director of the nation’s largest publicly-funded overseas multimedia network. Today, VOA reaches more than 275 million people around the world each week via radio, television and online media. Read MoreOriginal Article