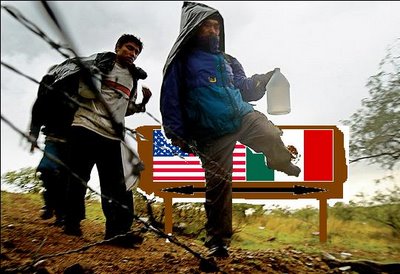 WASHINGTON—Last year’s debate on immigration reform centered on discussions on improving border security for the nearly 2,000-mile border between the United States and Mexico by adding new fencing, more electronic detection technology including drones, and beefed-up numbers of security patrol.

These concerns to secure the border presume that large numbers of Mexicans are highly motivated to leave their homeland, come to the United States, and never leave.

A new study challenges that assumption.

“The U.S./Mexico Cycle: End of an Era” concludes that the days of massive legal and illegal immigration from Mexico have ended and are not likely to return. Hence, it is called “the end of an era,” according to Aracely Garcia-Granados, executive director of Mexicans and Americans Thinking Together (MATT), which conducted the study in collaboration with Southern Methodist University.

The study confirms what a Pew Hispanic Center study first reported in 2012: The net emigration of Mexicans to the United States has slowed if not reversed, and that many Mexicans residing in the United States are going back home in historic numbers.

“We are not going to have a tsunami of Mexicans moving to the borders and staying here forever and ever. The numbers show that is not going to happen,” Garcia-Granados said.

Garcia-Granados spoke at the Wilson Center on Jan. 14 and Jan. 17 to report preliminary results on the study that was released in December 2013.

The value of the new report is that it reveals surprising reasons for the new trend in Mexico–U.S. migration. Economic motives for leaving the United States and deportation were not among the top reasons. The reasons were generally much more personal.

The findings are based on interviews with 601 returnees from the state of Jalisco, which has the highest return migrant population in Mexico among the Mexican states. The MATT website states that this is the first study to investigate the factors driving the return of Mexican immigrants to Mexico.

For three or four decades, the pattern has been a cycle of migration with the net result of a record number of Mexicans to the United States. By 2007, there were 12.7 million Mexicans living in this country—most of whom came illegally.

Some 77 percent of the respondents in the survey were undocumented when they came to the United States. Still, deportation and the fear of deportation were not mentioned very frequently for the reason for returning.

“A full 89 percent chose to return to Mexico on their own despite the general belief that most returned through deportation,” states the MATT website. Only 11 percent had been deported.

The figure of 89 percent in Jalisco may come as a surprise to most observers. Garcia-Granados put it in context when she said that other preliminary data found that states closer to the border had proportionately more deportees among the returnees. However, she estimate that the worst case would still be 60 percent return voluntarily.

The top three reasons for return migration were family reasons (37 percent), nostalgia for their country of origin (29 percent), and difficulty in finding a job in the United States (11 percent). Only 1.7 percent said being discriminated against or racism was a reason for their return.

Nearly one-half of the respondents (47 percent) said that the quality of life improved considerably while living in the United States. “But many are drawn emotionally to return to Mexico after 1–5 years, and most enjoy slightly higher incomes in Mexico upon their return than what they were earning in Mexico prior to migration,” states the study.

“Few receive support services for reintegration from government or community based organizations; most rely on family and friends to help them through the transition,” states the study.

Even though more than one-half of the respondents (54 percent) left family behind, the study found a strong desire to remain in Mexico. According to the study, “54 percent intend to stay in Mexico permanently and 17 percent said they will never return.”

Characteristics of the Sample

Most of the returning Mexicans in the survey said they migrated to the United States to look for employment (64 percent), better work prospects (48 percent), and a better salary (41 percent). These were the reasons most often mentioned.

While in the United States, 91 percent worked and held jobs. The respondents in the survey were almost entirely of working age; 95 percent were between the ages of 18 and 49.

The respondents fell in the lower end of the economic scale, holding low-wage jobs in the states. Two-thirds (66 percent) had only elementary or middle school education. Forty-three percent said they could not read English at all.

More than three-quarters of the sample were undocumented when they first entered the United States. About 15 percent came through a tourist visa.

Limitations of the MATT Study

MATT’s report is not a full-fledged research report but rather “preliminary findings and insights.” The study is limited to the state of Jalisco in central Mexico because it has the highest return migrant population among the Mexican states. The fact that the interviewees were all drawn from Jalisco means inferences from the sample may not be representative of the whole of returnees to Mexico.

“With its diverse mix of metropolitan, mid-size, and rural cities, Jalisco served as a foundational model for future studies MATT is planning to conduct in additional Mexican states,” states the MATT website.

MATT does not describe itself primarily as a research organization, but rather as a “bi-national nonprofit, with offices in San Antonio, Texas, and Mexico City, that is dedicated to leading the conversation on the issues that are having a profound effect on both the U.S. and Mexico.”

In other words, it is a kind of civic organization. MATT seeks to design and implement “initiatives for economic development, cultural interaction, education, and social outreach,” according to its website.