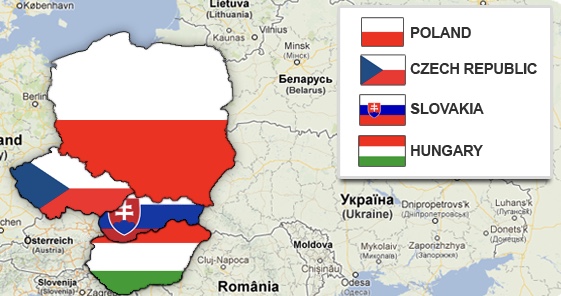 Image from, under the headline: The Visegrád Group Rises
The United States will increase its presence in Central Europe through new cultural, economic and security initiatives, US Secretary of State Mike Pompeo said during a press conference with Hungarian Foreign Minister Peter Szijjarto on Monday.
"I’m announcing new initiatives that will strengthen the US presence in Central Europe," Pompeo said. "We are increasing the support for people-to-people ties, events and exchanges [JB emphasis]. … We are also increasing support to help Hungary in its fight against corruption, strengthening law enforcement cooperation and providing mentorships training and exchanges … in all four Visegrad countries."
Pompeo said the United States’ absence in the region was "unacceptable" and claimed that the country’s rivals, particularly Russia and China, have stepped in to fill the vacuum.
"Today, we are reconfirming our determination for positive influence in the region. We do so through a reinvigorated diplomacy that seeks to cooperate strategically, but also allows us to frankly discuss areas where we disagree with manners that befits allies, and we do so by expanding America’s commercial, public diplomacy and cultural ties," Pompeo said.
Pompeo noted Washington’s opposition to the Nord Stream 2 pipeline project, saying that the issue is not about simply selling gas, but it is a matter of national security.
"This is about assisting countries throughout Europe and having alternative sources and not being dependent on Russia for their natural gas," Pompeo said.
The Nord Stream 2 project envisages the construction of two gas pipelines that will run from Russia to a hub in Germany while entirely bypassing Ukraine. The project is a joint venture of the Russian energy giant Gazprom with France’s Engie, Austria’s OMV AG, Germany’s Uniper and Wintershall and the UK-Dutch Royal Dutch Shell.
***Secretary Pompeo's Travel to Hungary and Slovakia: Honoring Shared History and Building for a Shared Future
Fact Sheet
Office of the SpokespersonWashington, DCFebruary 10, 2019

RENEWING OUR COMMITMENTS AND REINVESTING IN SHARED SECURITY