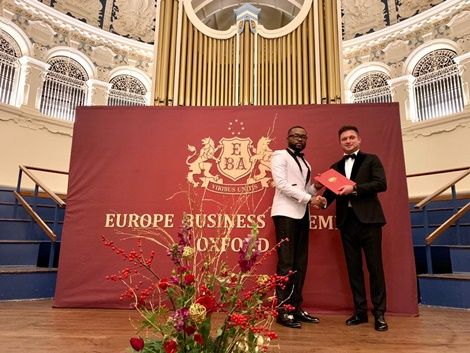 Image from article, with caption: Dr. WASK with Iv. Savvov, Founder, Managing Partner Europe Business Assembly, Oxford, UK
Being an entrepreneur can be challenging, rewarding, frustrating, satisfying, disappointing, and exhilarating.
Entrepreneurs are risk takers, willing to roll the dice with their money or reputation on the line in support of an idea or enterprise.
The high entrepreneurial skills in Dr. Williams Anarfi Sarpong popularly called Dr. WASK has caught the attention of the Europe Business Assembly and as such have been appointed the EBA Ambassador to Ghana and West Africa.
The Europe Business Assembly is a multinational research and analytical center of image technologies, PR projects and international cooperation programmes in various spheres of human activity.
The center was founded in 2000 in Oxford (Great Britain). It had founders who were scientists of universities and heads of commercial structures and public organizations of old Europe, who work in close cooperation with colleagues from all continents.
The EBA has a consultative status with Economic and Social Council (ECOSOC), the United Nations.
The mission of the EBA is to build a world of successful people which means creating the most comfortable environment for international partnership, with the goal of solving global problems of mankind. To realize this mission, EBA and its partners developed a number of socially significant international projects and programmes and established world renowned club distinctions.
The EBA Business Ambassador award is given for personal achievements in the field of intercultural communications, international cooperation and association of like-minded people.
The distinction is presented to most deserving individuals, participants of projects and programmes of the EBA and its partners as a token of deep respect and recognition for their merits in the development of international partnerships, the globalization of business and the global significance of those contributions.
This nomination is a recognition of the reliability of its owner as a business partner on the national arena and in international relations, as well as the introduction of the institution of public diplomacy [JB emphasis] into the practice of EBA.
The success of the EBA means the success of every member of its global community and together they build a world of excellence.
Also a subsidiary of the WASK Group of Companies, Trash Recycling and Management Organisation (TRAMO), was awarded the Best Business Enterprise of the year 2018, at the Socrates Award Ceremony held at the Oxford Town Hall in Oxford, United Kingdom from the 18th – 19th December, 2018.
Accepting his ambassadorial appointment, Dr. Williams Anarfi Sarpong, popularly called Dr. WASK said success is the result of perfection, hard work, learning from failure, loyalty and persistence.
The affable young entrepreneur who is also a network marketing giant and the Pioneer Leader for Vida Divina a network marketing company which produces health and wellbeing products, stated that heights by great men reached and kept, were not attained by sudden flight, but perseverance and toiling day and night while others slept.
Trash Recycling and Management Organization (TRAMO), is an exclusively owned Ghanaian Company incorporated on 9th April, 2014.
In 2016, TRAMO took its first delivery of a portable biogas plant for assembly in Kumasi. This followed long discussions that had been initiated between TRAMO Ghana Limited and Shenzhen Puxin Science and Technology Company Limited in China, regarding the development and assembly of the Puxin biogas digesters for the Ghanaian market.
It has long been TRAMO’s key strategic goal to spearhead an industry that prioritizes the conversion of organic waste into energy and to help address Ghana’s sanitation challenges.
On November 1, 2018, Dr. WASK launched the WASK Family Foundation. A foundation aimed at alleviating poverty in our society and giving the less privileged a sense of belonging.
The launch which took place at James Town a suburb of Accra, saw leaders of the community raising serious issues about poor sanitation.
According to them the fishing community, lacks waste collection bins and as such are engulfed in filth.
Dr. WASK therefore promised to provide them with the bins but indicated that there will be a sensitization and training workshop for the community before the waste collection bins are giving out.
As a young entrepreneur who believes in youth empowerment and the need to support young people realize their dreams, Dr. WASK is giving out GHC10,000 each to ten young entrepreneurs who have top notch ideas to start their business.
Speaking to Kasapa Fm’s, Leticia Ohene Asiedu he said supporting entrepreneurship is essential for the development and improvement of every country and its people adding that modern-world society needs innovations and effective solutions for existing problems.
Alongside assisting young entrepreneurs with the GHC10,000 Dr. WASK said he is ready to give the young entrepreneurs, professional business advice to him them deal with the formalities of establishing what legal form their businesses should take, drawing up business accounts, dealing with the relevant authorities about taxes, insurance issues and industrial related issues.
As a result of his hard work, he was bestowed the Innovator award 2013 at KNUST during the Vice chancellor’s award. He also spearheaded the United States Peace Corps Stars Project in Kumasi.
Dr. WASK also attained an entrepreneurship award at the IPMATIC African Awards 2014.
In 2018 he was awarded the best network marketer of the year during the Humanitarian and Business awards, which was held by Gymped. In the same year, he received an award for the Best Global Business Growth Influencer, 2018 at the World’s Changers Summit held in Dubai.
Dr. WASK holds satisfactory certification from the college of health sciences at the Kwame Nkrumah University of Science and Technology.
In addition to his credit, he has a Professional Certificate in Strategic Management and has established himself as a business network personality.
He is also an Honorary Professor of the Academic Union, Oxford UK, an international academic association of over 200 University Chancellors, Scientists and Researchers.
Original Article