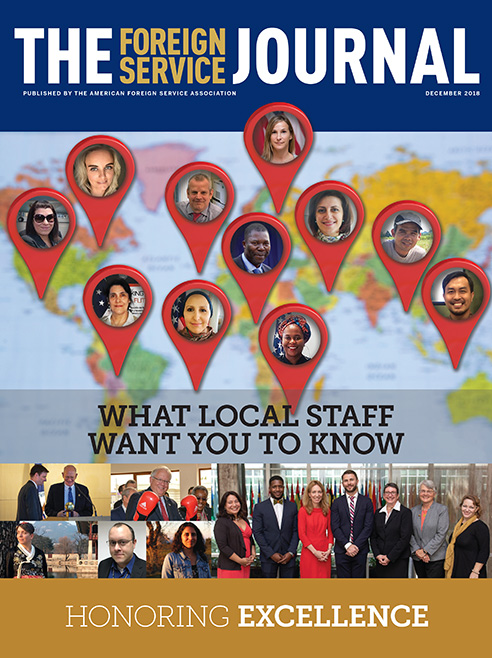 image from
Secretary Pompeo should note from the December issue of The Foreign Service Journal [JB — see] that the largest employee group within the cabinet Department for which he is responsible is our more than 55,000-strong corps of Foreign Service National Employees. If he reads that December issue of the FSJ he will also learn that this key group of State employees provides the continuity and collective memory of our missions abroad and in many ways the backbone of our foreign policy mechanism around the world.
What is not specifically stated in the December issue is the fact that when the annual budget for the Department of State is not approved on time by the Congress and the President, this entire Foreign Service National Employee (FSN) Corps is automatically placed on leave without pay. Many of these essential employees occupy low-paying positions. None of these key employees earn high-paying salaries. And certainly none of these people should be expected to go without pay at any time let alone during the Holiday Season.
Short review of government closures:
1995 – 21 day shut down led by Republicans as they tried to obstruct President Clinton’s proposed budget for 1996 over funding for Medicare, education, the environment and public health;
2013 – 16 day shut down led by Republicans as they sought to obstruct funding for President Obama’s Affordable Care Act;
In the 2018 shut down the point of view by altogether too many people in the Trump Administration seems to be that a government closure is a mere inconvenience for a few federal workers with senior officials warning that this could go on for a long time. But this is a short-sighted and incomplete perspective on what is actually going on. As noted above the Department of State employees over 55,000 FSN’s working at US Embassies and Consulates across the world providing the backbone for our diplomatic, economic, and commercial activities. During a shut down these 55,000 plus people do not receive their pay. In the specific case of Nigeria, for example, a country where corruption and inefficiency is endemic, US Embassy and Consulate FSN’s are paid on a scale that is set by USG regulation on a scale that is competitive in the local economy. In many cases this pay is barely enough to provide food, rent, and medical attention. Landlords do not suspend rental payments and these people still need to pay for food and medical services even though they are not receiving their pay.
The Nigeria example is but one example of the hardship that FSN’s are enduring now but it is by no means the only such example.
It would be good to hear Secretary Pompeo on this issue.
****Timothy Dodman is a retired Foreign Service Officer from the U.S. Information Agency (USIA). Before his work in USIA, Mr. Dodman served for thirteen years in the Department of the Navy which included assignments in Japan and Saudi Arabia. Dodman’s USIA service took him to Mbabane, Swaziland; Lagos, Nigeria; and Moscow, Russia as a Management Specialist. In retirement he served again in senior management positions at the U.S. Embassies in Zagreb, Croatia and Ashgabat, Turkmenistan.
*Robert Gosende is a retired Senior Foreign Service Officer from the U.S. Information Agency. His Foreign Service specialization was Educational and Cultural Affairs though as a generalist officer he served as President Clinton’s Special Envoy for Somalia at the height of the humanitarian crisis there in 1992-93 and as the Officer in Charge of election assistance to South Africa during the run-up to the 1994 elections that brought Nelson Mandela to office. During their 36-years of service, he and his wife worked abroad in Uganda, Libya, Somalia (twice), South Africa (three times), Poland and the Russian Federation, as well as in Washington, D.C., where Mr. Gosende was assigned as Deputy Associate Director of the Bureau of Educational and Cultural Affairs and as Area Director for sub-Saharan Africa. In retirement Mr. Gosende served for twelve years as the Senior International Officer for the sixty-four campus State University of New York.
Original Article