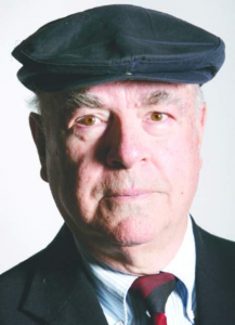 Farmer image from article
The Senate Intelligence Committee recently released two independent reports on Russian attempts to influence the 2016 presidential election in the United States. The reports accuse the Russian government of conducting a disinformation campaign designed "to help elect President Trump, and worked even harder to support him while in office."
"The Russians aimed particular energy at activating conservatives on issues such as gun rights and immigration, while sapping the political clout of left-leaning minority voters by undermining their faith in elections …" both reports concluded.
And what are we doing to counter Russia's ongoing disinformation campaign? Not much! During the Cold War I spent 28 years with the now defunct U.S. Information Agency (USIA), which told America's story to the world (the agency's motto) and aggressively countered Soviet disinformation and misinformation. But after USIA was merged into the sprawling State Department almost 20 years ago, our efforts to counter enemy propaganda went into hibernation, buried deep inside a bureaucratic labyrinth in Washington, D.C.
USIA was a semi-autonomous agency that worked closely with the State Department to explain, defend and support U.S. foreign policy, but was independent enough to react quickly to anti-American propaganda, wherever it reared its ugly head. After we won the Cold War, however, President Clinton and his weak Secretary of State, Madeleine Albright, decided that USIA was no longer needed and killed the small but effective propaganda (we sophisticated diplomats call it "public diplomacy") [JB emphasis] agency.
When USIA moved into the basement at State, alleged public diplomacy "experts" split off the disparate broadcasting elements of USIA — including the flagship Voice of America (VOA) — and created an amorphous entity called the Broadcasting Board of Governors (BBG) to supervise U.S. government radio stations that broadcast to foreign audiences. Full disclosure: I supervised VOA Spanish language broadcasting to Latin America for two years (1977-79).
The Trump administration renamed BBG the U.S. Agency for Global Media (USAGM), but it's still the same old ineffective and underfunded agency supervised by people who don't understand public diplomacy. Neither did President Obama, who appointed former Time magazine Chief Editor Richard "Rick" Stengel as his Undersecretary of State for Public Diplomacy. Unfortunately, Stengel soon sank into the Washington Swamp along with the BBG.
These days, VOA and international broadcasting are after-thoughts in Washington, D.C., as the Trump administration slashes budgets while struggling to counter disinformation and misinformation emanating from our foreign adversaries. Martha Bayles, a Boston University humanities professor who authored a 2014 book about U.S. public diplomacy and America's image abroad, laments that "there has been almost no coverage of the persecution of USAGM journalists around the world, or of the rather drastic budget cuts that make those journalists more vulnerable to corruption and compromise." That's what she wrote after a recent corruption scandal at VOA.
"Foreign language journalism supported by our government dies in darkness," she added, echoing the Washington Post. Indeed it does, but the larger issue is the lack of a concerted, coordinated U.S. government effort to counter foreign disinformation and misinformation campaigns. Happy New Year!
Guy W. Farmer is the Appeal's senior political columnist.
Original Article