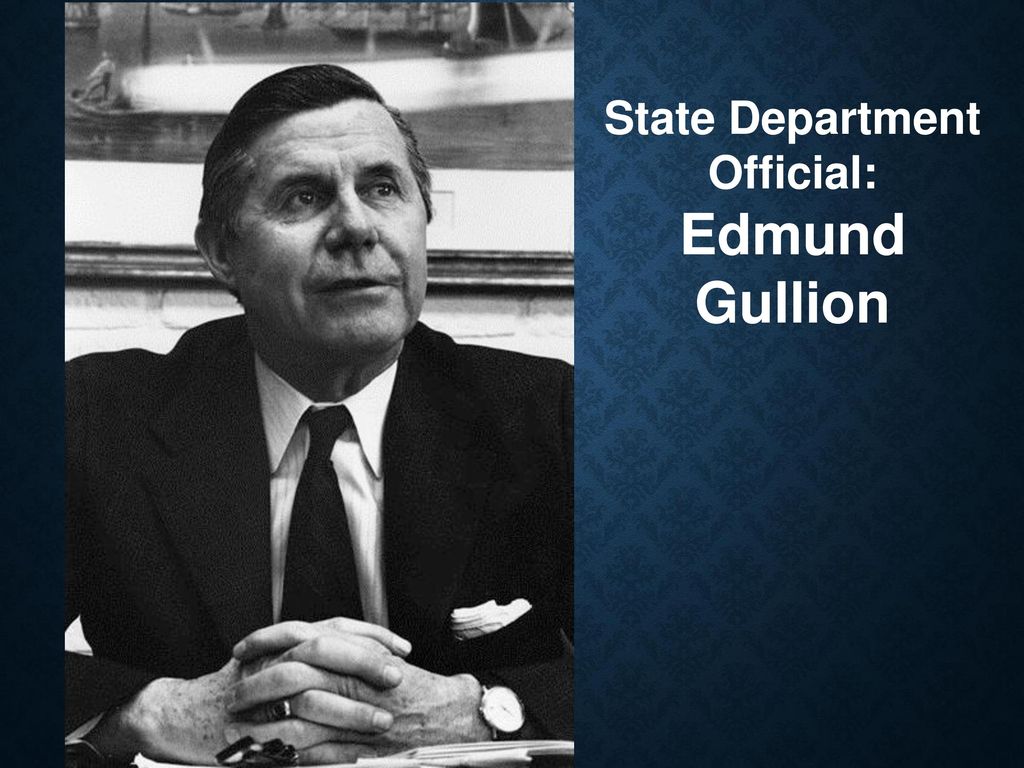 image from
Wolfgang Saxon, The New York Times, March 31, 1998
Edmund Asbury Gullion, one of the country's most accomplished career ambassadors and former dean of the Fletcher School of Law and Diplomacy at Tufts University, where he trained the next generation of Foreign Officers, died in his sleep the night of March 17 at his home in Winchester, Mass. He was 85.
The cause was apparently a heart attack, the Fletcher School reported.
Mr. Gullion earned his spurs in war-torn Europe and ended his diplomatic career in 1964 as United States Ambassador to the recently independent Congo, a flashpoint of the cold war. As an old hand on Indochina he was also deeply involved in the conflict that tore at Southeast Asia, whose reverberations followed him even after he settled into academe in Medford, Mass.
He was dean of the Fletcher School from 1964 until 1978.
The Murrow Center, named after Edward R. Murrow, was intended to establish direct communications with the peoples of other lands and to build mutual understanding.
It also fit nicely with Mr. Guillion's [JB sic] view, expressed just recently: ''I always thought journalists and diplomats could learn a great deal from one another.''
The present dean of the Fletcher School, John R. Galvin, former Supreme Allied Commander of NATO, Europe, called Mr. Guillion a role model and the driving force behind the Murrow Center.
''I was a fellow at Fletcher in the early seventies when Ed Gullion was the dean,'' General Galvin said Friday. ''His gift to us was the kind of leadership and vision that carried him to the top levels of the foreign service.''
In an interview with The New York Times in 1964, Mr. Gullion said that ranking diplomats should be treated like military battle commanders — given a general mission but left relatively free to call the shots. He said he knew of no ''Pianola'' posts where ambassadors just appreciatively watch the keyboards playing; nor, he said, had modern communications turned them into striped-pants deliverymen.
Edmund Gullion was born in Lexington, Ky. At 17, while still in high school, he won an international oratorical contest presided over by President Hoover in Washington. His theme was ''The Influence of John Marshall on World Affairs.''
He graduated from Princeton University in 1935 and from the National War College in 1949. His first diplomatic mission took him to Marseilles [JB – sic] as a deputy consul in 1937.
He was a deputy consul in Salonika when Italy invaded Greece, and he watched the capture of Salonika by the Germans, who detained him until there was an exchange of consular personnel. He was also charge d'affaires in Helsinki in 1944 when the United States cut relations with Finland as a German ally and led the exodus of Americans from Finland to Sweden.
Fluent in French, he held senior positions at the American Embassy in Saigon from 1949 to 1952. It was the beginning of the Indochinese war, and he was a supporter of Vietnamese independence from France, as well as from Communism.
Before he went to Leopoldville in 1961 as Ambassador to the former Belgian Congo, later Zaire and now again called Congo, he was deputy director of the United States Disarmament Administration under John J. McCloy.
Although he was often considered a hawk on Vietnam, his position was complicated by his first-hand knowledge. As early as 1963 former colleagues recalled a discussion in which he looked at them and asked: ''Do you really think there is such a thing as a military solution for Vietnam.''
Years later it was reported that the Johnson Administration had recruited him in 1965 to send out feelers to North Vietnam, and he secretly met with its emissaries several times in Paris. The initiative failed because of the stumbling block that would persist for years longer: the question of who was to control South Vietnam.
Mr. Gullion led a group of prominent citizens who supported the Nixon Administration's policy of ''Vietnamization'' and gradual American withdrawals.
For him, the conflict spilled over to the Fletcher campus — where antiwar activists accused the school, and him, of being in cahoots with the Central Intelligence Agency and of American interference around the world through the Agency for International Development.
Mr. Gullion is survived by his wife of 37 years, Patricia Palmer Gullion.
***See also: Nicholas Nicholas J. Cull, Before Gullion: The Evolution of a Phrase" (2006), uscpublicdiplomacy.org.
My own piece pertaining to Gullion cites him as writing in Robert F. Delaney, John S. Gibson, editors, American Public Diplomacy: The Perspective of Fifty Years (1967):

To connote this activity, we at the Fletcher School tried to find a name. I would have liked to call it “propaganda.” It seemed like the nearest thing in the pure interpretation of the word to what we were doing. But “propaganda” has always a pejorative connotation in this country. To describe the whole range of communications, information, and propaganda, we hit upon “public diplomacy.”

FYI, The Gullion statement goes on to say:

Let me read the [Fletcher] school's definition of the term:

Public diplomacy is concerned with the ways in which governments, private groups, and individuals shape those public attitudes and opinions which influence the formulation and execution of foreign policy.

This is a short working definition. I hope it will suggest to you questions on the differences from formal diplomacy, the links with media, and the instruments of "public diplomacy."