In this book Ruxandra Trandafoiu sets out to chronicle the online cultural and political expressions of the Romanian diaspora, using websites based in Europe and North America. Through online exchanges, Romanians perform new types of citizenship, articulated from the margins of the political field. The author presents a plausible and intriguing picture of the Romanian diaspora online, writes James Koranyi.

Romanian migrants are everywhere. And those that aren’t already here are going to come over to Britain and exploit the welfare state. We know of the Big Issue sellers from Roma villages in Romania; we’ve heard of the benefits tourists from deepest, darkest Romania; we’ve read about the Romanian criminal gangs haunting the streets of London and Rome; we’ve seen their pictures in the Daily Mail. Such has been the coverage of Romanians living in and coming to the United Kingdom (and elsewhere) that one might be left with the impression of a clandestine plot concocted by millions of Romanians to take over the world. But what about these Romanians who now live in the UK, Italy, Spain and North America? What do they think and do? Are there ways of finding out more about their ghastly plans to subvert Britain (and elsewhere) by looking at the diaspora from within?

In her book Diaspora Online: Identity Politics and Romanian Migrants, Ruxandra Trandafoiu examines identity debates and discussions among recent Romanian diaspora groups in the abovementioned countries by tracing online discussion forums and combining these with a number of oral history interviews and published sources. This study, a first of its kind, reveals the richness of online sources, yet it also raises some interesting issues surrounding such material. The book is divided into four parts: ‘Departures’, ‘Arrivals’, ‘Politics’, and ‘Second Life’. Trandafoiu takes us on a journey of uncertainty, racism, and vigorous online debates. Contrary to the media hysteria surrounding Romanian migrants, the story told here is rather more banal: Romanian migrants want a better life, they want to integrate, and they beat themselves (and each other) up (metaphorically speaking) if they fail to accomplish any of this.

What is striking about this study is its source base. It relies heavily on online material taken from online discussion forums and websites. Scholars would do well to consider the changing nature of communication in the twenty-first century: as we become ever more reliant on the internet, we appear to leave more and more traces behind. We are constantly creating archives without much structure and perhaps without much thought. Even this book review is another fragment left behind for posterity. This potentially opens up a vast array of sources for scholars to harvest. Yet there are several methodological issues that come out of this: do the authors of online content know what they are doing and what are the implications for evaluating those sources? Can we, as scholars, hope to make sense of the overwhelming material floating around in cyberspace? Is that source base, in actual fact, less stable and less accessible than ‘offline’ material? How do we make connections between online chat and offline behaviour? It is the latter point that Trandafoiu attempts to address: she arranges and digests a number of online chat rooms and discussion forums in order to establish the very debates which she hopes will give her access to Romanian diaspora identity politics.

As Trandafoiu indicates throughout her study, we can never be entirely sure whether the online personas we encounter correspond with individuals in the ‘real world’. Maybe the discussions online are closer to people’s inner thoughts, since the online world appears to guarantee a degree of anonymity. On the other hand, perhaps the very nature of anonymity in online forums means that people put on a performance that does not resemble their offline identities. This is quite difficult to gauge, although we are repeatedly confronted with instances that do indeed speak for the latter observation. Whatever the case, Trandafoiu presents a plausible and intriguing picture of the Romanian diaspora online. 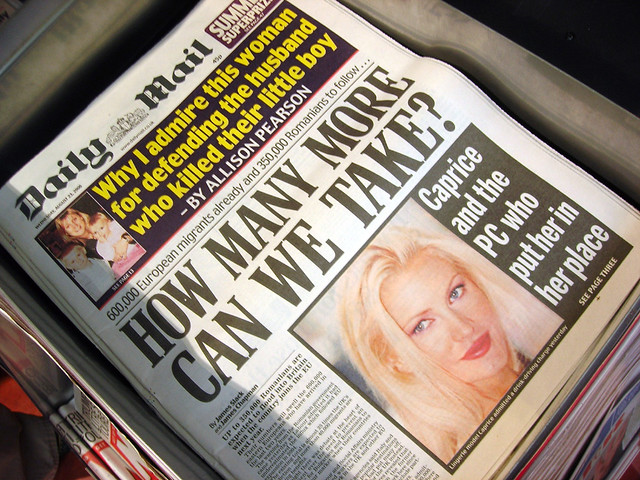 Migration with its adverse experiences of hostility, racism, and money problems have been presented by sections of the online community as a rite of passage. Failure to persevere and make money have often been interpreted as a sign of weakness. Discussants, such as the misfortunate Anton (pp. 43-5) who decided to throw in the towel, were subjected to much vitriol by fellow Romanian posters in what Trandafoiu calls a process of ‘natural selection’. It is not all that surprising to find anger, resentment, and frustration online as a mirror of the offline world. David Kideckel, for instance, has established similar attitudes and frustrations in present-day Romania among disenfranchised miners and factory workers in the Jiu Valley and around Făgăraş. In the case of the Romanian diaspora, narratives of failure, the fear of arriving, and the fear of returning as well as racism surfaced repeatedly in the online spaces inhabited by web-savvy Romanian migrants. The all too familiar pattern of victims of racism (Romanians) also becoming perpetrators of racism (against Roma) is also evident here. In this sense, much of Trandafoiu’s analysis reflects the experiences of post-socialist societies in a neoliberal world.

Diaspora Online also explores the creation of ‘branded’ online spaces for the Romanian diaspora. The quest for sense and structure online is presented at its sharpest in the final chapter. Webmasters and other creators of webspace feature as online ‘nation builders’ who use recognisable symbols to mark out a website as specifically Romanian (often with ethnic connotations) and (potentially) diasporic. Even though online websites are often thought of as ‘free’ and independent (thereby underpinning the claim that the internet has somehow liberated us), there is much evidence on offer to expose the fundamental constraints imposed by commerce and institutions on the online world. In some cases, such as the growth of Yahoo groups, the commercial impact is self-evident. In others, such as the website Români în UK, the links to private investors are less obvious yet still real. The omnipresent (and often annoying) adverts are a testament to the problematic relationship between the need for funds and the idealistic vision of creating untouched and usable webspace for a community of online users. Nonetheless, Trandafoiu regards Romanian diaspora websites as self-contained and still ‘innocent’. Instead of exploring the links between the power of big business, neoliberalism, and global migration patterns, Trandafoiu, rather, regards what she sees as the ‘untapped’ nature of the Romanian diaspora online as one of the reasons for its ‘inefficiency’. Here, I suggest, the picture is more complex. Romanian diasporic communities online have had to contend with contradictory messages on the internet and have found themselves being torn between ‘borderless’ communication, the economic pressures created by neoliberalism, and the need for a defined and identifiable community

Perhaps most tellingly, though, Trandafoiu introduces readers to the murky world of an online discussion ethos. Between the more complex explorations into online activism (pp. 115-32), self-awareness (pp. 67-74), and identity politics in North America (pp. 151-74) lurks something far more prosaic: nastiness, noise, and narcissism. Trandafoiu calls these online hissy fits ‘Diasporic Cannibalism’ (p. 81): online discussants call each other Nazis; one user begs for his online profile to be deleted in public; yet others are accused of being CIA and/or KGB agents. What we learn from this is not necessarily something specific to the Romanian diaspora in various countries, but a broader point about the pattern of online chatter and its implications for scholars evaluating such material. Threats, accusations, lunatic fringe conspiracy theories: all these could also feature in a study on Guardian online commentators or various Gamer discussion forums. And this leaves us with one nagging thought: what on earth are we producing online?

Note: This article gives the views of the author, and not the position of EUROPP – European Politics and Policy, nor of the London School of Economics.