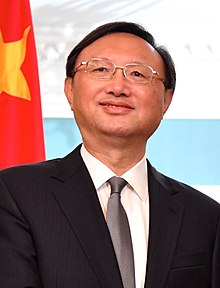 Yang Jiechi image from Wikipedia
MUNICH — European leaders should disregard "lectures" from Vice President Mike Pence and other U.S. officials about Chinese encroachment into Europe, a top diplomat from the communist nation said Saturday.
Pence — amplifying warnings by Secretary of State Mike Pompeo — told the Munich Security Conference that Huawei, a Chinese multinational telecom company, posed a threat to regional security.
“Chinese law requires them to provide Beijing’s vast security apparatus with access to any data that touches their networks or equipment,” Pence said in his prepared text. “We must protect our critical telecom infrastructure, and the United States is calling on all our security partners to be vigilant and to reject any enterprise that would compromise the integrity of our communications technology or national security systems.”
That prompted a rebuke, during a question-and-answer session, from Yang Jiechi, a top diplomat in China’s Communist Party.
“People all know where their interests lie, so let there be fewer lectures [lest] people actually doubt whether they have the interests of the Old World in their mind or they have their own group's self-interest in mind,” Jiechi said.
“People should not and cannot be misled,” Jiechi added. “Huawei as a company is cooperating very closely with European countries. In the fourth industrial revolution, we should all work together, and Chinese law doesn't require companies to install backdoors to collect intelligence.”
Jiechi also delivered a pointed critique of the Trump administration's public diplomacy. [JB emphasis]
“I hope some Americans will have a little bit more confidence in themselves and be a little bit more respectful to other people in the so-called Old World,” he said.
Original Article