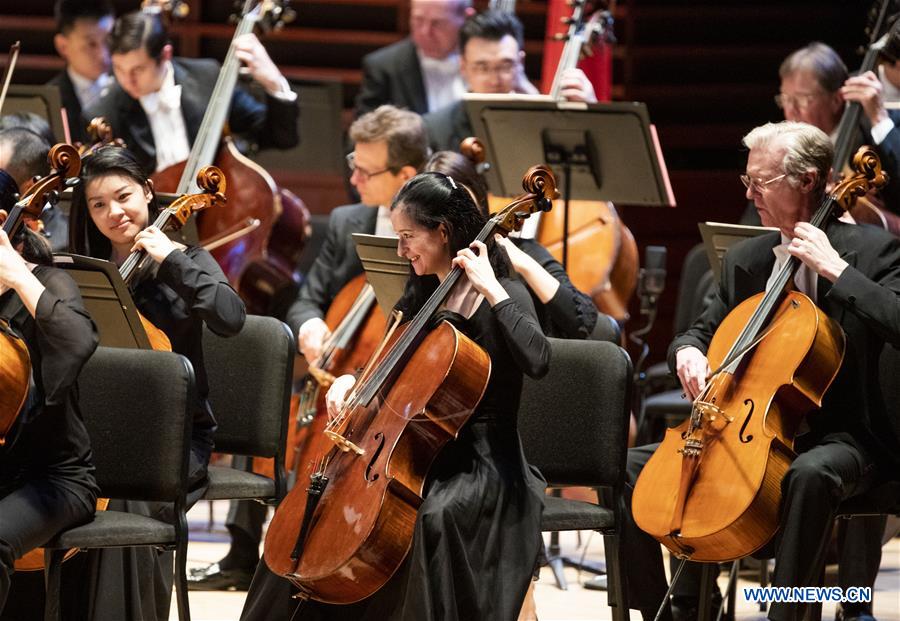 image from
PHILADELPHIA, United States, Jan. 29 (Xinhua) — Chinese musicians teamed up with their U.S. counterparts on Tuesday at a special New Year concert in Philadelphia, the U.S. state of Pennsylvania, to mark the 40th anniversary of China-U.S. diplomatic relations.
About 100 musicians from the Shanghai Philharmonic Orchestra (SPO) and The Philadelphia Orchestra performed in the first side-by-side Chinese New Year Concert in Philadelphia.
Walter Douglas [JB – see], deputy assistant secretary of state for public affairs and public diplomacy [JB emphasis] in the Bureau of East Asian and Pacific Affairs at the U.S. Department of State , said that it is important to have people-to-people ties.
The joint concert by the two orchestras is a good sign of people-to-people cooperation, which dates back to 1973, he said at a reception before the concert.
To mark the unique event, the two orchestras jointly proposed a distinctive east-meets-west program featuring the world premiere of the newly revised version of Peking Fantasy, a work co-commissioned by the two orchestras and composed by young Chinese composer Gong Tianpeng.
"Inspired by the artistic power of Peking Opera, the crowning heritage of traditional Chinese performance art, Peking Fantasy incorporates the essence of Chinese culture with elements of western symphonies, hoping to introduce the traditional Chinese art to international audience in a more accessible way," Gong told Xinhua.
The collaborative concert has attracted some 2,000 strong local audience.
"It's nice and has captured the spirit with combined symphonies. It's quite amazing that such high caliber musicians from both sides to come together to present the beauty of music," said Katherine Bakeev, who traveled from the neighboring state of Delaware in order to enjoy the concert.
"It was really impressive that such grand scope, range and style can be combined in one piece. It's totally universal," she added, when commenting on the Peking Fantasy.
The Philadelphia Orchestra and SPO have worked together since 2016 to advance cultural exchanges between the United States and China.
Founded in 1900, the Philadelphia Orchestra is one of the preeminent orchestras in the world. The Orchestra made a historic visit to China in 1973, becoming the first U.S. orchestra to make a China tour since the founding of the People's Republic of China. Enditem
Original Article