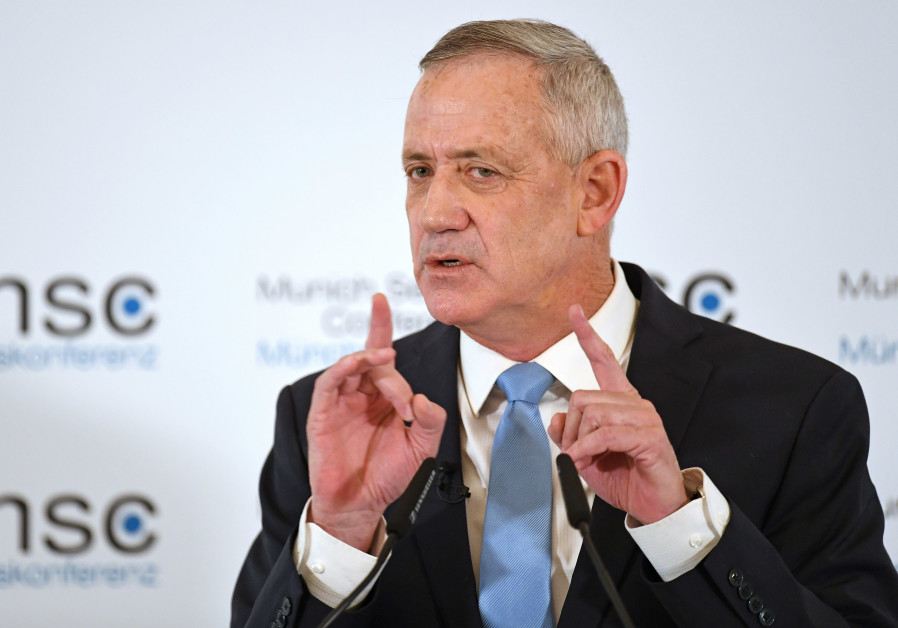 Lahav Harkov, Jerusalem Post, February 20, 2019
It could easily be understood that Gantz is delegitimizing English-speaking immigrants as phonies who can’t be leaders of Israel.

Image from article: Benny Gantz speaks at the annual Munich Security Conference in Munich, Germany February 17, 2019
“In a month and a half, we will all choose between a ruler who has English from Boston, heavy makeup, and luxury suits – and an Israeli leadership which is real, caring, authentic and not phony,” Israel Resilience Party leader Benny Gantz said in a speech Tuesday night.
Leave aside the fact that Prime Minister Benjamin Netanyahu’s English is from spending most of his childhood in the suburbs of Philadelphia, and not Boston.
What are all the other Israelis from Boston, Philadelphia, New York, London, Johannesburg or Melbourne supposed to think?
Regardless of what Gantz intended, that remark, as well as him saying that Netanyahu was busy in America “to improve your English and practice it at luxurious cocktail parties” while Gantz “lay in muddy foxholes with my soldiers on frozen winter nights,” makes it sound like there’s something inherently wrong with having spent time in America.
It could easily be understood that Gantz is delegitimizing English-speaking immigrants as phonies who can’t be leaders of Israel.
This criticism took off on social media, where Likud MK Yehudah Glick, New Right candidate Caroline Glick (no relation) and others said they saw Gantz’s comment in the same light.
Of course, it’s quite easy to prove Gantz wrong. Like Netanyahu, former prime minister Golda Meir spent most of her childhood in the US. Her English was from Milwaukee. First Ashkenazi Chief Rabbi Yitzhak Herzog’s English was from Leeds. Legendary Israeli diplomat Abba Eban’s English was from Cape Town. Haim Weizmann only moved to the UK as an adult, but he was a university professor there for decades before becoming Israel’s first president.
As Netanyahu said in his statement responding to Gantz: “My English was a first-class tool in the war for our public diplomacy [JB emphasis] that helped me greatly in bringing our foreign relations to unprecedented heights.”
Israel Resilience candidate Michael Biton also mocked Netanyahu’s English in a Kan Radio interview Wednesday morning – the same Biton who worked as an au pair in the US to improve his English.
Gantz is not the first one to take this tack; Netanyahu has faced it throughout his career. It’s true that he is uniquely polished compared to most Israeli politicians. It’s also true that many have learned from Netanyahu’s style. Subtract the perfect American accent, and Yesh Atid leader Yair Lapid’s calculated look and studied talking points are not so different.
The party sent a response to these arguments, that “Israel Resilience and its candidates had no intention of disregarding any population and will work to foster a connection, respect, and understanding among all communities in Israel.” A party Insider emphasized that the remark was not targeted at English-speaking immigrants at all.
But politicians need to be especially careful with their words and think about how they can be interpreted.
For a party that constantly says they are trying to unite Israelis of all kinds, Israel Resilience is sending a surprisingly nativist message, which goes beyond insulting Anglos. Only Israelis who speak and look a certain way are authentic, real leaders, is what they seem to be saying.
For a party that constantly says “there is no Right and there is no Left,” as their jingle goes, they are behaving astoundingly like the Left did after the establishment of the state. This harkens back to Labor forebear Mapai’s attitude towards new immigrants, especially those from the Middle East, many of whom still remember the condescension and hold a grudge against the Left for it.
This is a dangerous tactic. Unfortunately, it doesn’t seem to be getting much attention, in contrast to Gantz minimizing Netanyahu’s military record.
English-speaking immigrants deserve respect. Many of us left good lives abroad purely out of ideology and love of Israel, in order to help develop and build this country and to be part of its future. We’re not asking for an award or special thanks. But there’s no reason to imply that we’re lesser because some of us may talk differently or appreciate a nice suit and a well-made cocktail.
Original Article