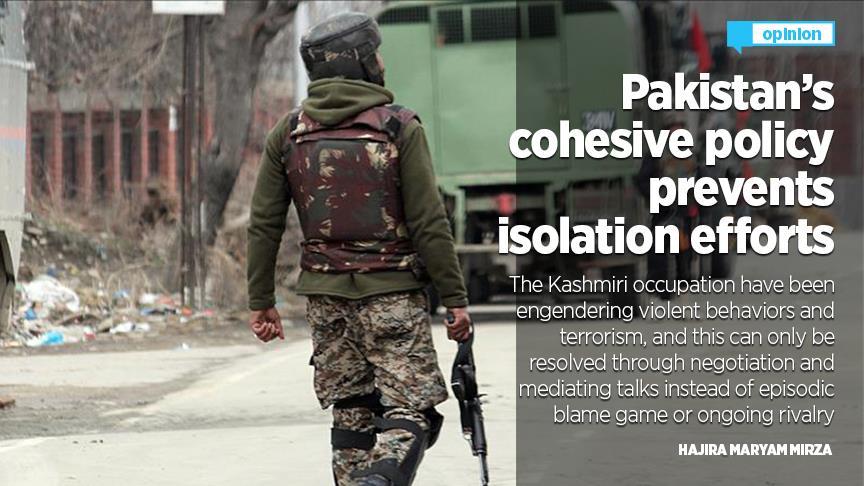 image from article
The Kashmiri occupation have been engendering violent behaviors and terrorism, and this can only be resolved through negotiation and mediating talks instead of episodic blame game or ongoing rivalry
ISTANBULLast week on Feb. 14, a militant attack was carried out in the Pulwama district of India-held Kashmir. Killing 40 paramilitary police officers [1], the militant group Jaish-e-Mohammed took responsibility for the attack. After a meeting with the Cabinet Committee on Security chaired by Narendra Modi, India placed allegations that the attackers were linked with the Pakistani state. Also, Indian Finance Minister Arun Jaitley announced “complete isolation” and revoking “the most favored nation status” to Pakistan under World Trade Organization rules (a trading status to ensure non-discriminatory trade).The statement by the Indian leadership comes at a very fortuitous time with “more holes than Swiss cheese”, as it were, when one observes the geopolitical arena. As Narendra Modi’s policy towards Pakistan has been inconsistent and disjointed throughout his tenure, the blame-game is coupled with the Indian elections due to be held in April. The allegations also struck at a time when diplomatic efforts of Imran Khan’s government are aimed at revitalizing trade and ties globally. Khan’s visit to Qatar, UAE, Saudi Arabia, Turkey, China, and Malaysia are a case in point. Moreover, in an effort to take Afghanistan seriously, it is positioning itself as a mediator in the Afghan peace process, which is reflective of the Khan government’s clear strategic objectives.Efforts of improved regional diplomacyAfter taking the office last year, Imran Khan offered India an olive branch to restart bilateral talks, mediate peace, and a directed policy to resolve the dispute over Kashmir. Nevertheless, the Indian government’s approach towards Pakistan is not within a similar conduit. In September, a scheduled meeting between the foreign ministers of the two countries was cancelled [2], hence the Indian government's volte-face, denting the negotiation prospects between the two countries.It should be noted that Pakistan right now is not in an isolated situation, and indeed far from it; the current diplomatic efforts under Imran Khan’s premier are unlike past scenarios. Previously, the country displayed fragile governance and an absence of a strategic direction and cohesiveness in its foreign policy.Currently, through shifting power blocs and forging alliances, Pakistan’s public diplomacy [JB emphasis] efforts are set to construct a new political and social imagination, with a straightforward agenda in the geopolitical space. Therefore, Imran Khan’s saying that “Pakistan won’t fight anyone’s war” [3] is in line with Islamabad’s resolve in pursuing these strategic values.Taking an active approach to the Afghan peace process, Pakistan’s big question is whether it will be able to bring the Afghan Taliban to the negotiating table. Peace in Afghanistan cannot be achieved if Pakistan is not involved and requires an inclusive approach to achieve reconciliation. Therefore, Narendra Modi’s Bharatiya Jannata Party (BJP)’s stance to isolate the country in the international community is not realistic.Similarly, through the China-Pakistan Economic Corridor, Pakistan has established a strong strategic relationship with the emerging power of the globe. Chinese investments in Pakistan began in 2015, when the country was marred by corruption, an image of terrorism, and was therefore deemed as an unfavorable place for investments. Chinese investments have offered Pakistan economic prospects for the future. With the Sino-American relations worsening over China’s emergence across the Indian Ocean, which the U.S. views with a suspicious eye, an alliance between India and the US [4] is flourishing to form a counter force against an assertive China in global politics.Vote-bank and the ultra-nationalist discourseWith elections around the corner in India, the rise of the opposition force of Rahul Gandhi from Congress, and India’s economic woes [5] put up a formidable challenge against Modi on his way to getting re-elected. The BJP is a political wing of the Hindu nationalist group “Rashtriya Swamesevak Sangh”. Retrospectively, the BJP’s projection of policy towards Pakistan is similar to the anti-Muslim discourse amongst its supporters. It comes as no surprise that the post-Pulwama attack scenario fueled mobs of Hindutva supporters against [6] Kashmiri students. As a result, the blame-game tactic against Pakistan works well in the BJP’s favor in enlarging its vote bank through an ultra-nationalist ideology.Kashmir is India’s Achilles heel, and a strong, concrete diplomacy by Islamabad deeply unsettles New Delhi. Touqir Hussain opines [7] that India’s focus also rests on keeping Pakistan off-balance and limiting its diplomacy in the Kashmir issue. The broader issue remains the lack of a cohesive policy towards Kashmir. No policy has been put in place for the people of Kashmir or against rising militancy, which has gained more ground under Narendra Modi’s leadership [8].The attack in Pulwama was conducted by a local Kashmiri teenager [9], Adil Ahmad Dar. Reasons for a young person’s slide into extreme fringes call for a cool-headed assessment so that it is hopefully better understood why more and more people have been becoming involved in acts of violence. A culture of impunity, judicial killings, and abuses by security forces is deeply entrenched in the experiences of the populace in Jammu and Kashmir [10].The Kashmiri occupation have been engendering violent behaviors and terrorism, and this can only be resolved through negotiation and mediating talks instead of episodic blame game or ongoing rivalry amongst participants.[Hajira Maryam Mirza is an Assistant Researcher at TRT World Research Centre]* Opinions expressed in this article are the author’s own and do not necessarily reflect the editorial policy of Anadolu Agency. Original Article