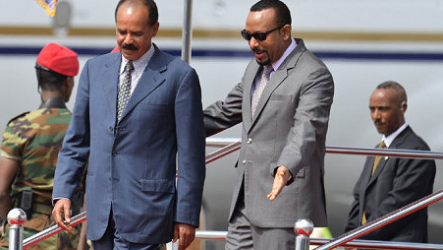 uncaptioned image from article
The leaders of Ethiopia and Eritrea are set to formalize relations by signing detail cooperation agreements to boost economic relations focusing on trade regulations and infrastructural connectivity.
Prime Minister Abiy Ahmed of Ethiopia and Eritrean President Isaias Afwerki, are soon to seal a comprehensive cooperation agreement aimed at formalizing the two countries [.] This is indicated by Ethiopian Ambassador to Eritrea, Redwan Hussein.
The two countries have been undertaking extensive discussions on ways to institutionalize the national and border trade. Discussions have also made on port usage, custom, immigration and transport linkages and the comprehensive agreement would be tabled for the respective leaders for approval, according to Ambassador Redwan who spoke to the state daily – The Ethiopian Herald.
“After Ethiopia and Eritrea endorsed the agreements by their legislative organs, they would establish a joint commission that supervise the execution of accords in such a way ensuring the mutual benefit of people of the two countries and putting the rapprochement in solid base,” Ambassador Redwan said.
After the two countries decided to end hostility about a year ago, they have opened borders allowing free movement of the people of the two countries. Since then The leaders of the two countries have also met several times while Ethiopian Airlines has also began flight to Eritrea after two decades.
With the aim of strengthen the people to people, a 63-member Eritrean Public Diplomacy [JB emphasis] and Cultural Group has been in Ethiopia. Similar delegation from Ethiopia is expected to travel to Asmara for similar cultural diplomacy.
Ethiopia and Eritrea wet [sic] to war in 1998. The two years long war has led to the death of tens of thousands of people on both sides and economic loses on both sides.
Original Article