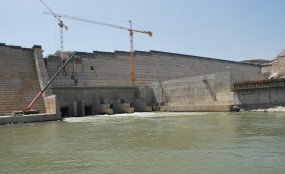 Photo in article: Ethiopian Herald – The Grand Renaissance Dam or GERD.
Addis Ababa — Public and official diplomacy [JB emphasis] need to go side by side as they are critical to enhance ties and bridge gaps regarding the Ethiopian Grand Ethiopian Renaissance Dam (GERD), member of an Egyptian public diplomacy said.
In an exclusive interview with ENA [Ethiopian News Agency], Moustafa El Gendy, a former independent member of Egypt's parliament and member of the diplomacy delegation, said public and official diplomacy are "as critical as two wings of a plane".
He added that countries should use both public and official diplomacy simultaneously in order to resolve differences.
"Let us fly the plane with the two wings not one. One wing depicts official diplomacy while the other related to public diplomacy. Then, with the two together, with two good pilots and I mean good pilots in the cockpit, we will fly and we will go far," he said.
Describing public diplomacy as 'a combination of a farmer and the land as well as a worker and the machine, who all seek to live in dignity and see their kids grow', El-Gendy noted "that is why public diplomacy succeeds."
He accentuated that Egypt and Ethiopia should resolve the issues regarding GERD as there is enough water for everyone.
"These two nations represent quarter of a billion population who have history of thousands of years, who have civilization. We can feed Africa together. There is water for everybody," he stated.
According to him, countries need to sit and work together and devise ways to utilize the unused 90 percent of the Nile water which is either evaporated or going to swamps so far.
"We can do things together. Enough of politics, let us think about the people who dream." Noting that young people in both countries have a dream they want to achieve, he said "let us work together to realize the dream."
"We have everything, we have water, we have resources, we have brains, we have manpower, and we have land in Sudan 100 million acre of land not cultivated. We can work together to cultivate the land in Sudan, we can make electricity in Ethiopia and Uganda … we can eat together, we can make projects together to feed all the Arab on the other side who have oil and have nothing except money and oil," he anticipated.
Spokesperson of Ethiopia's Foreign Affairs Ministry, Nebiat Getachew said public diplomacy among the Nile riparian countries has created better understanding about the primary win-win concept of the GERD since its inception.
"It is important to enhance the public diplomacy, apart from the official diplomacy as it helps further understanding," he added.
To further deepen relationship, one has to work with all actors both in Ethiopia and Egypt, he said, and noted "the level of trust, the level of confidence between the people of the two countries will be further enhanced."
Noting that the presence of good relationship among business communities and higher educational institutes of the two countries, Nebiat said, "with the same initiative, we should be able to broaden this relationship."
Ethiopia has launched the Grand Ethiopian Renaissance Dam on the Nile in 2011, with the aim of meeting local demands for power and means of earning additional foreign currency.
The two countries have started to exchange public diplomacy delegations in 2014, in order to narrow their differences over the construction of the multi-billion hydroelectric dam.
Original Article